how sweet it is

Hello and YES! This is the blog formerly known as the Tartine Bread Experiment. Please visit  me there for a very fun, very satisfying bread journey. That is where all the magic began...
. . .


so, it was a natural progression, right, first the savory potato, then the sweet. i don't know, call me predictable. no, no i've never been accused of that. and i am hoping that my bread path will never be seen as such either. uncomplicated, maybe. predictable? no indeed.

i got to thinking about potato bread since i made a half dozen amazing peasant loaves. i gave away most, devoured plenty, and i wanted to keep going, but i wanted something a little different. i had avoided potato bread for so long because it was such a mystery, but now that i found myself baking scores of the things, i had to ask myself: what's next? sweet potato, that's what's next. 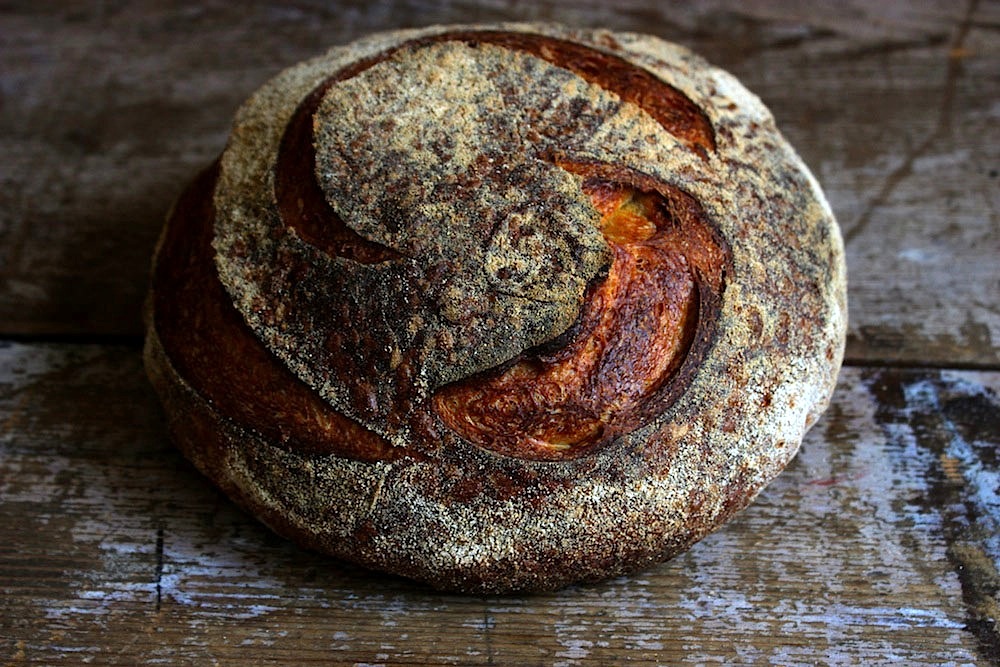 i approached the 'plain jane' thinking that the sweet potato would behave much the same as the russet in our dough. but here's what's funny, the hydration of our newest sweetie didn't do a double sneak attack like our last spud did. i kept the hydration modest, because i knew that she would contribute her own sip of water for sure (sweet potatoes ring in at 76% water), but the hydration was present from dough mix up and stayed put. remember our last loaf became more hydrated once after autolyse, then again during our turns. a russet potato evidently has some sophisticated, slow-release mechanism built in.

i ended up adding 5g of water at salt to loosen things up with this loaf. daredevil, me. i think with the peasant bread, the double hydration maneuver is smart. you never know how much water the russet will contribute to your dough, so best to use restraint of hand and add more later. with sweet potatoes, i would not be too bold in declaring that one could add all of the necessary water at dough mixup and leave it at that. of course, as with all breads, it is possible to double hydrate if you find that your dough is running a little on the dry or tight side. 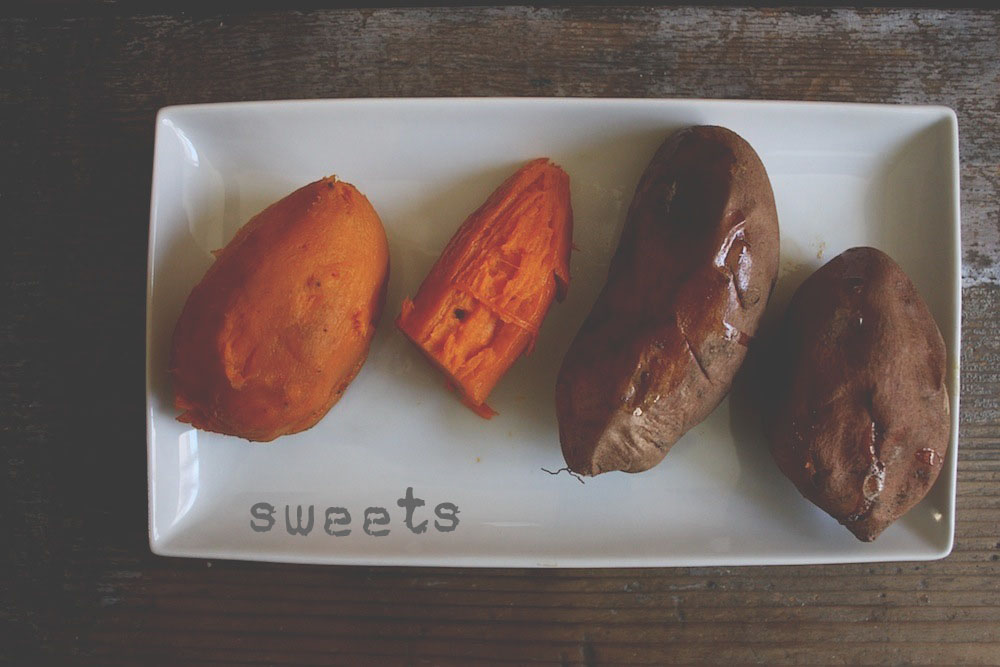 this dough weighs in at 76% hydration, using my water-to-starch calculations in the sweet potatoes (see the last post for this), the sweet potato providing about 24.5% of the water. and what a gorgeous dough to work with, visually, tactilely, olfactorily.

i used giusto's 'artisan' bread flour as the dominant flour in this week's bread, with 25% freshly stoneground bluebird grains hard white spring wheat. the loaf baked up wonderfully shattery on the outside, and super tender on the inside. altogether it was chewy and fabulous, like the artisan loaves we dream of making in our very own kitchens. you can totally smell and taste the sweet potato here. it gives the loaf a warm and slightly sweet flavor, and the color of the openish crumb was a feast for the eyes. 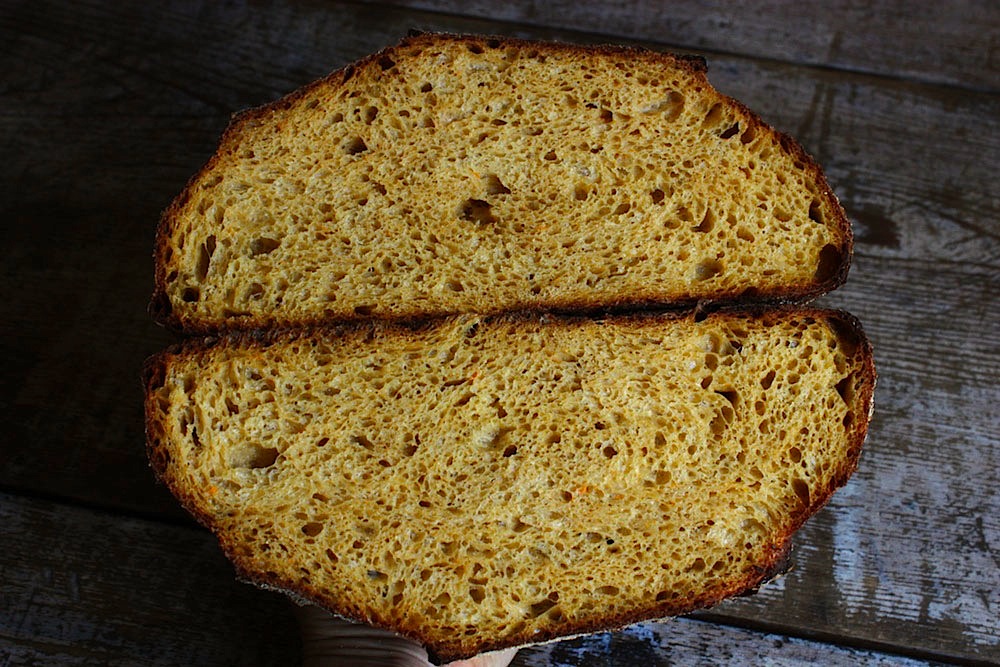 i think when working with potato breads, it is a wise idea to choose a strong bread flour to ensure that we get proper elasticity, since the addition of the potato matter, if you don't use a strong flour, can potentially end in a dense loaf. and i since giusto's and i are newly weds, i decided to go with the artisan. giusto's offers discounts on cases, just so you know. and trust me, you will go through a case of this stuff easily. i was able to get just shy of 6 loaves from a 5 pound bag, and in my kitchen, that's like a week's worth of baking.

without further ado, here is the formula for today's little sweetie. to be sure, little miss plain jane is far from ordinary. just you wait and see. 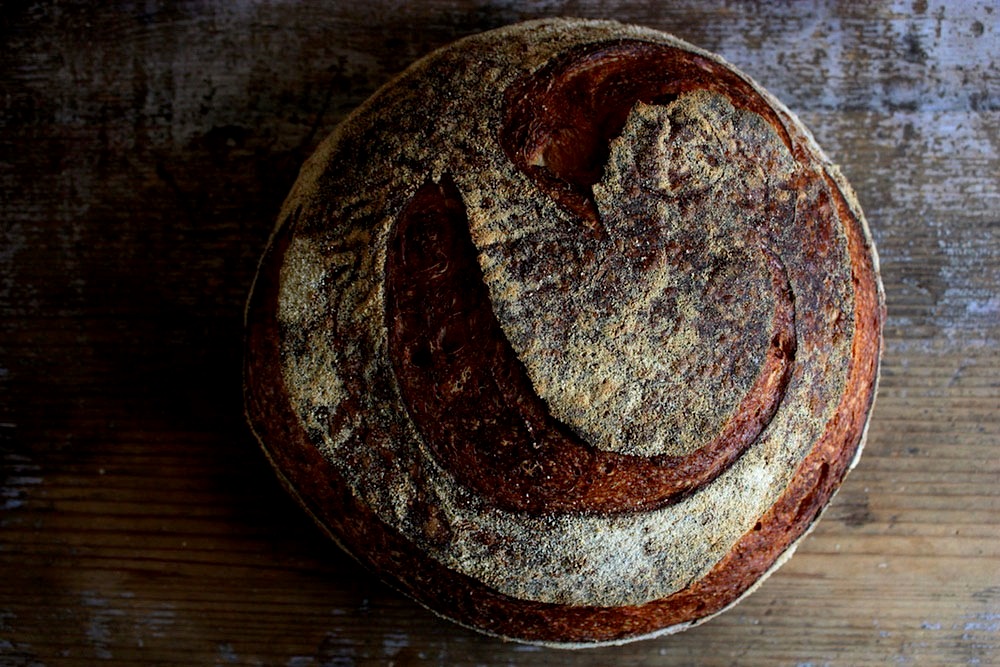 So, I have been feeding my starter 3x a day. Two days before you plan to make your 'Plain Jane' levain, kick your starter into high gear by feeding it 4x a day. It loves this intense feeding schedule, and will reward you with lofty loaves.

Mix all of this up together until you arrive at a medium viscosity paste. Ferment until it gets loose and bubbly, active looking. Mine went for 7 hours 15 minutes. 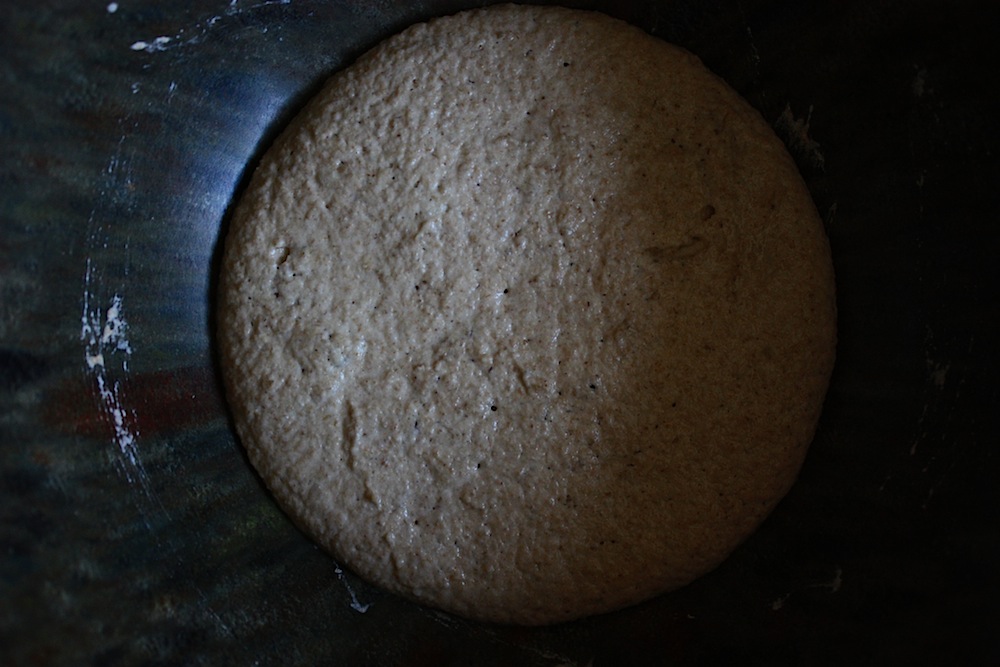 While your levain is working its magic, bake your sweet potato(es). They should be soft when pierced with a knife and will ooze their sugars. Speaking of, make sure you lay down some parchment or the potato sugar will fall to the oven floor and cause a horrible, smoking mess. Cool the potato(es), and when easy enough to handle, peel and rice. I use a potato ricer, but my friend g$ (that's 'G-Money' to you) suggests using a colander if you don't have one. Just press the potatoes through the holes. 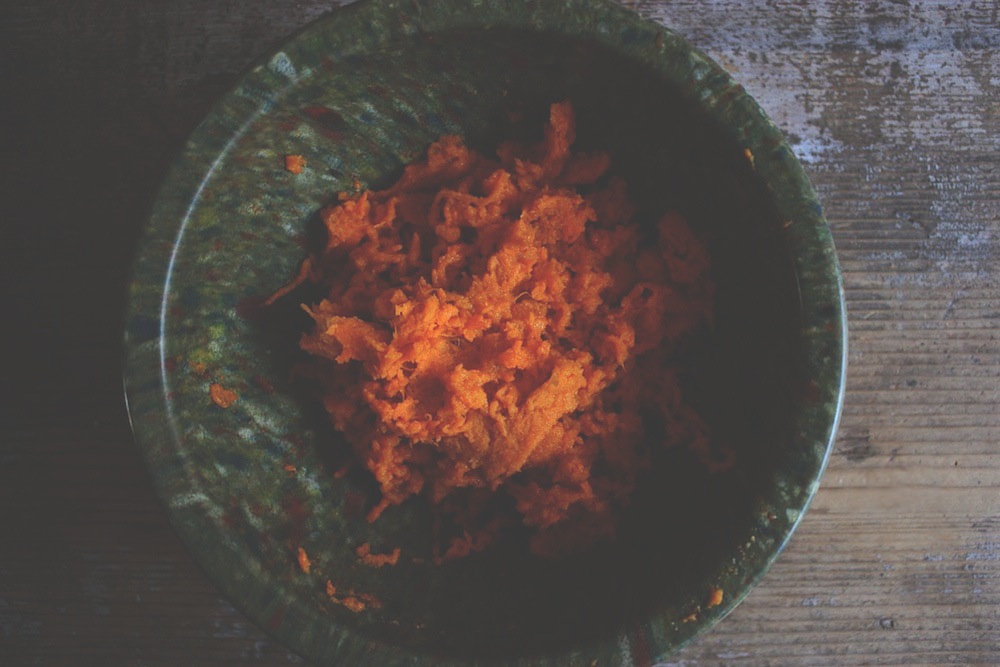 When the levain has successfully fermented, dissolve it in the water then add the flours and the cooled, riced sweet potato. Squish all of this up and autolyse for one hour.

After autolyse, squish the salt into the dough until it is thoroughly incorporated. 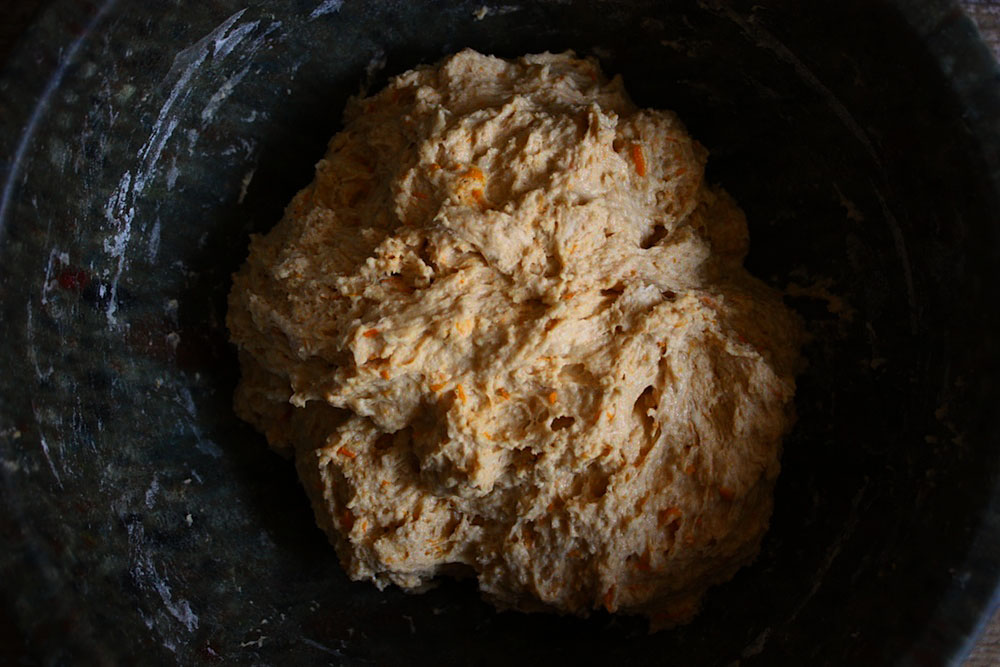 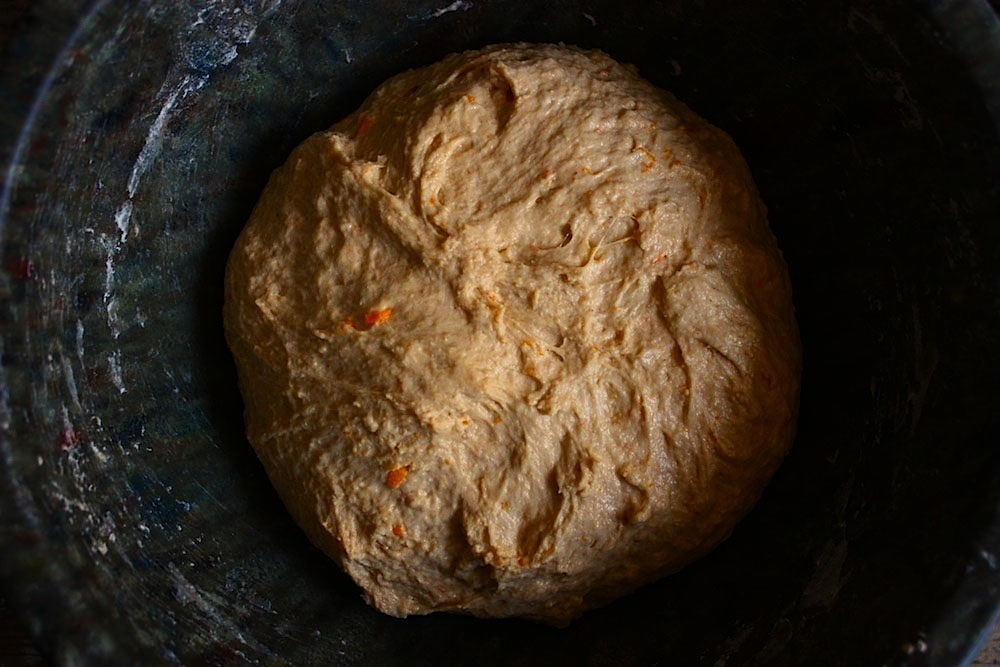 Bulk fermentation time. 4 hours, as usual, perform your turns as you normally would every half hour until the dough starts to puff up. Stop turning here so you don't press out all of your hard-earned gasses. I think I stopped my turns after 2.5 hours because it was fairly warm here, thus the dough fermented quickly. Leave it be for the remainder of the bulk fermentation should you stop your turns before the 4 hours is completed. 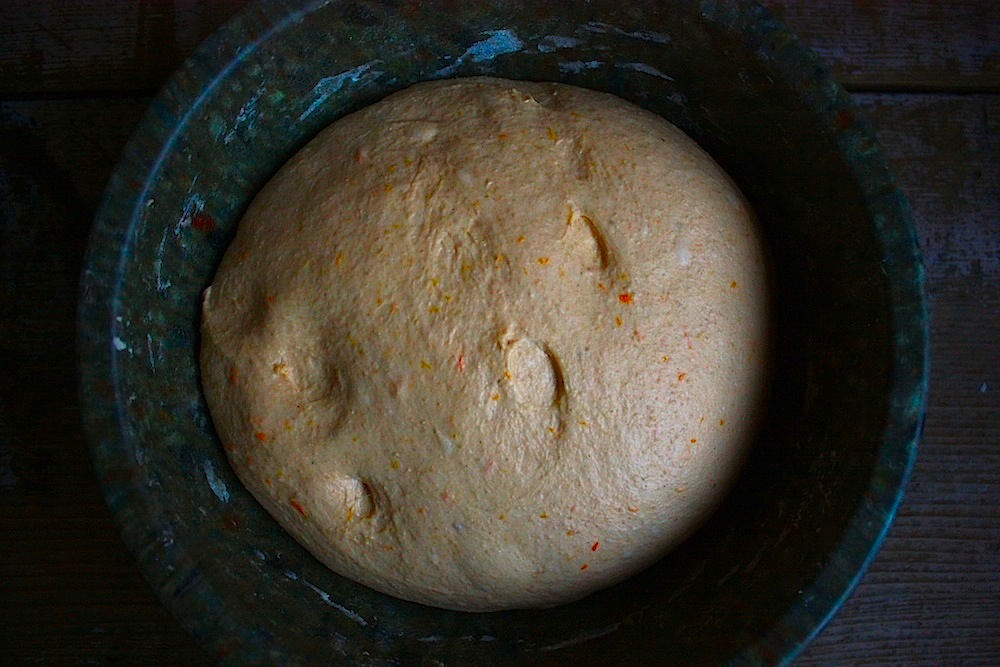 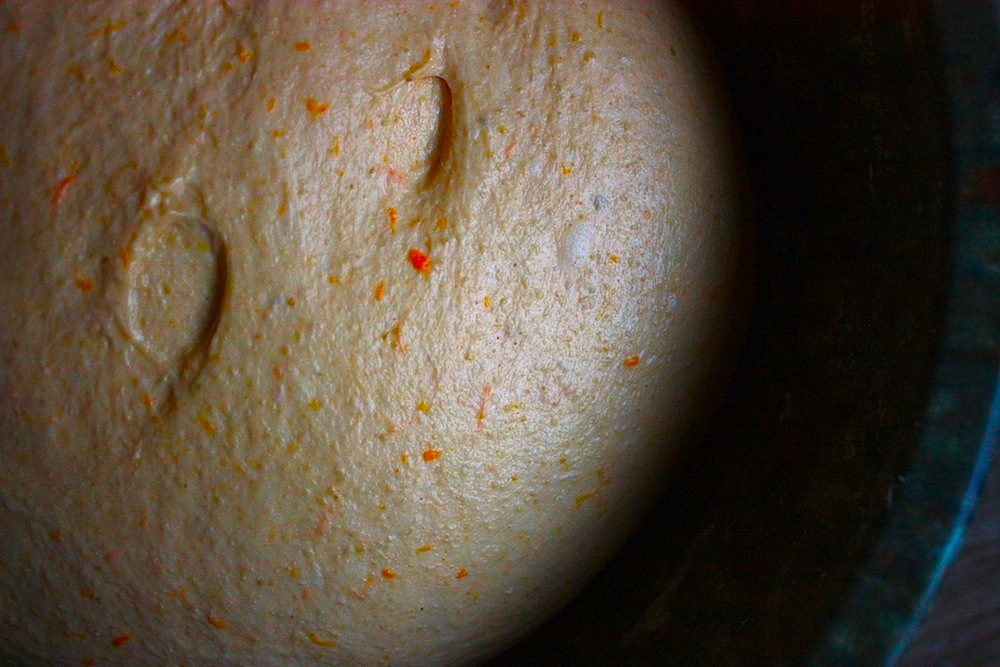 After the bulk, scrape the dough onto a worktable that has been dusted with rice flour. Pull in the sides to make a loose round and rest for 10 minutes. 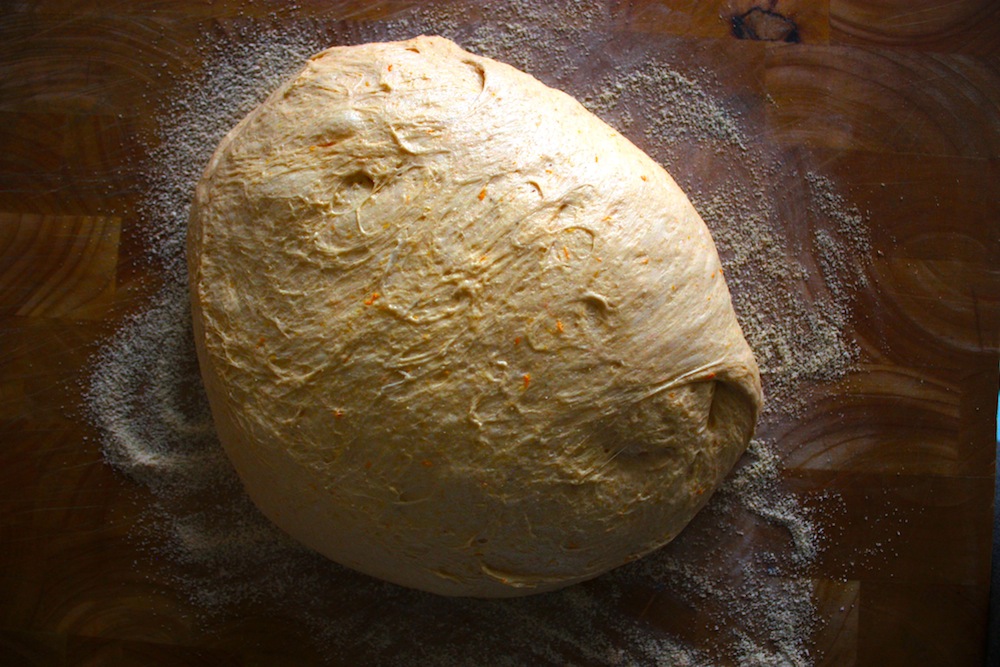 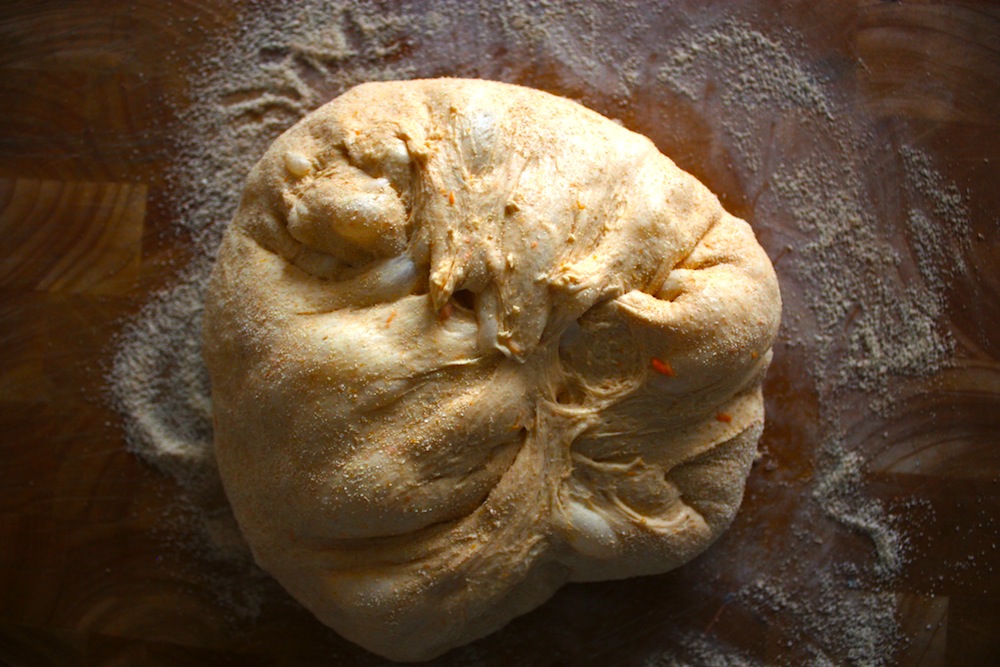 After the bench, shape the dough into a boule.

Pop the boule into a banneton or a bowl that has been lined with a linen piece dusty with rice flour. 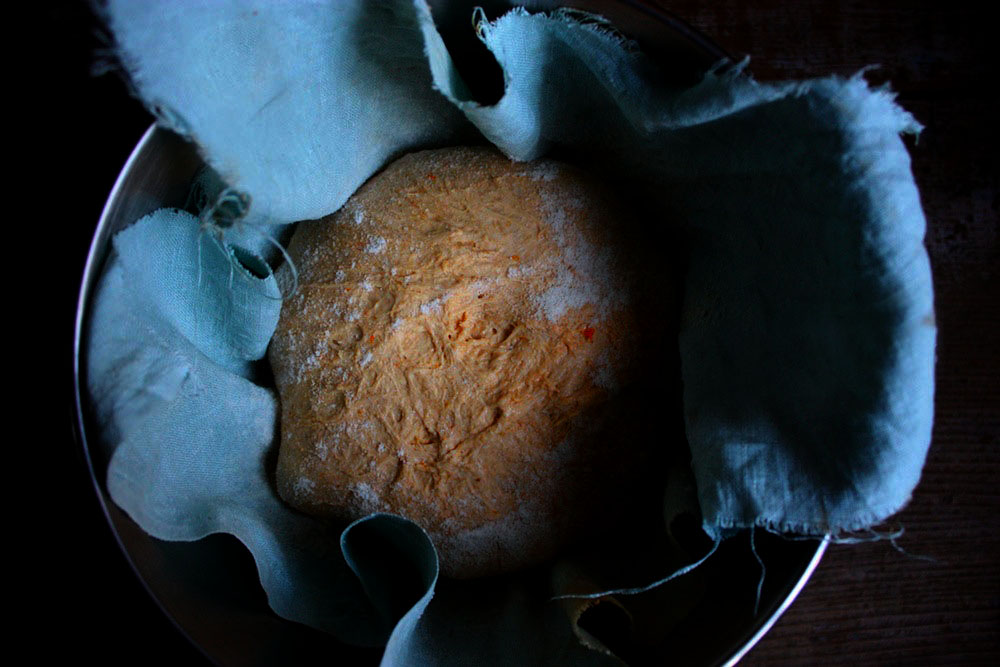 I swear by my 4.5 quart Kitchenaid mixer bowls. Perfect size and shape to ferment the loaves. I have four of them solely for this cause. You can get them for about thirty bucks on eBay. Pop the dough into the fridge and ferment for 15 hours. I would not advise going beyond this.

One hour before you plan to bake your bread, preheat the oven to 500 degrees, this that has been outfitted with your stone and combo cooker, both halves.

When the oven is preheated (full hour! no cheats!) pull the dough out of the refrigerator. It should have expanded nicely. 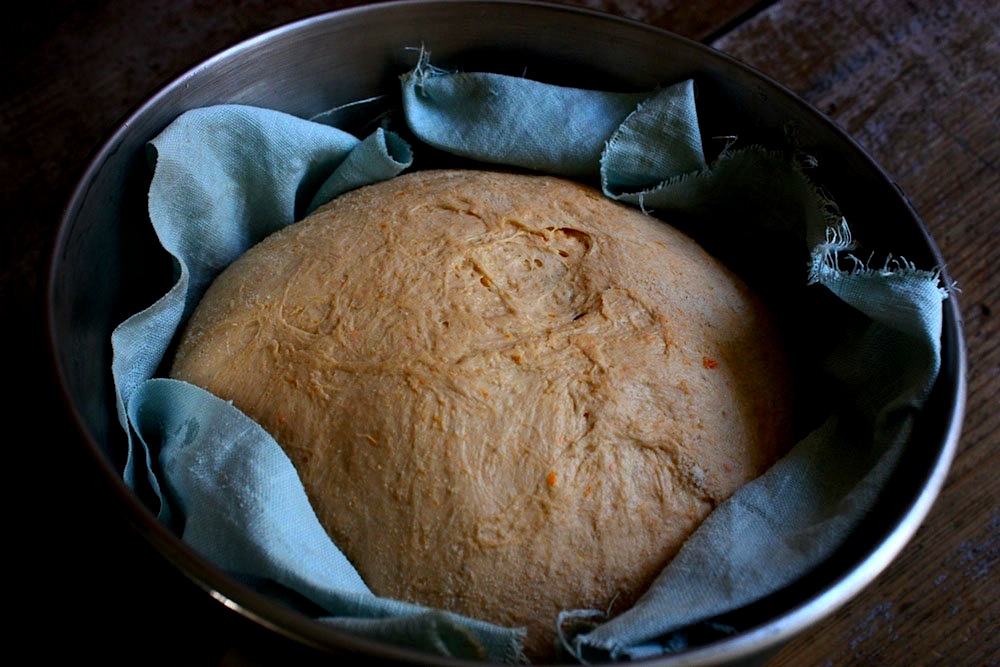 Place a piece of parchment over the mouth of the bowl, invert the bowl onto a peel and remove the bowl and cloth. Now is the time to brush away any excess rice flour so you don't end up with a snowy loaf. 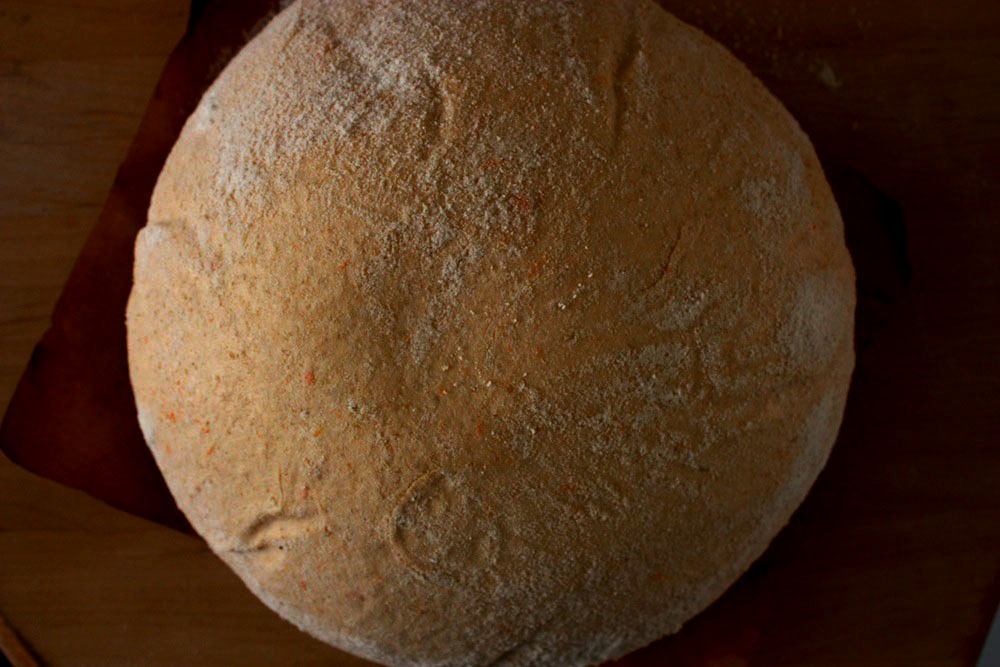 Slash or snip the dough in a pattern of your choosing, then slide the dough into the shallow half of the combo cooker, pop on the lid and bake for 15 minutes at 500 degrees. After 15 minutes, lower the temp to 475 and bake for 15 more. After this 15, take the lid off of the combo cooker, and nestle the shallow half into its mouth. This will create a buffer between the hot stone and the bread's butt, and keep it from burning. Ohh and ahh at your oven spring and your perfectly steamed loaf. 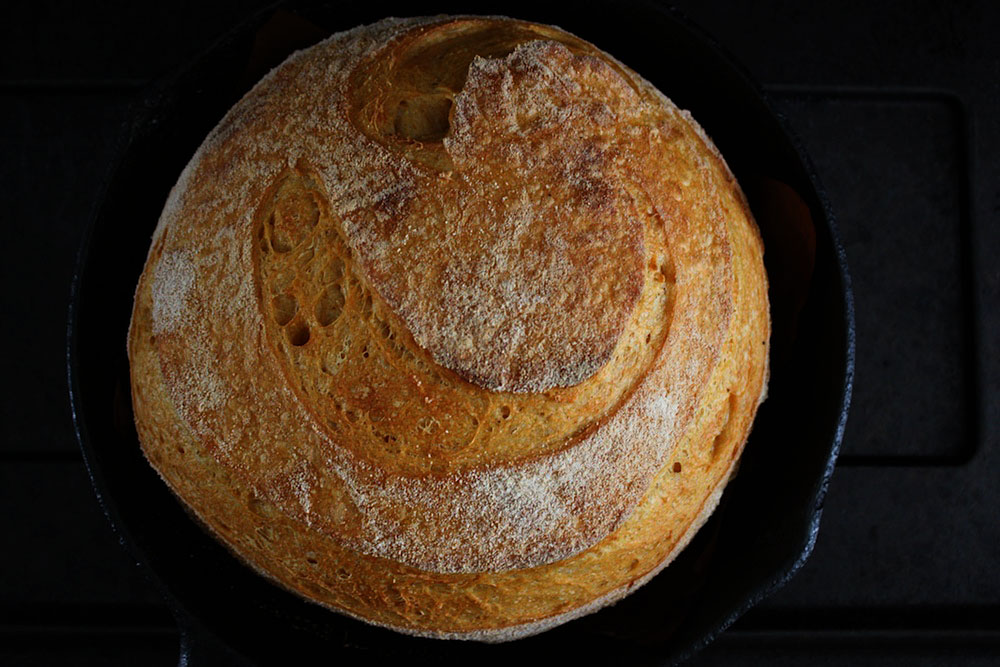 Slide back into the oven and toggle the temp between 475 and 450 degrees. Potato bread browns quickly and you may have to bake on the lower end so don't end up with a burned exterior and undercooked crumb. Spin the pan a couple of times while it is baking for even browning. And you will get a seriously caramelized crust when all is said and done. Take the loaf to 210 degrees.

Cool at least 2 hours before slicing. 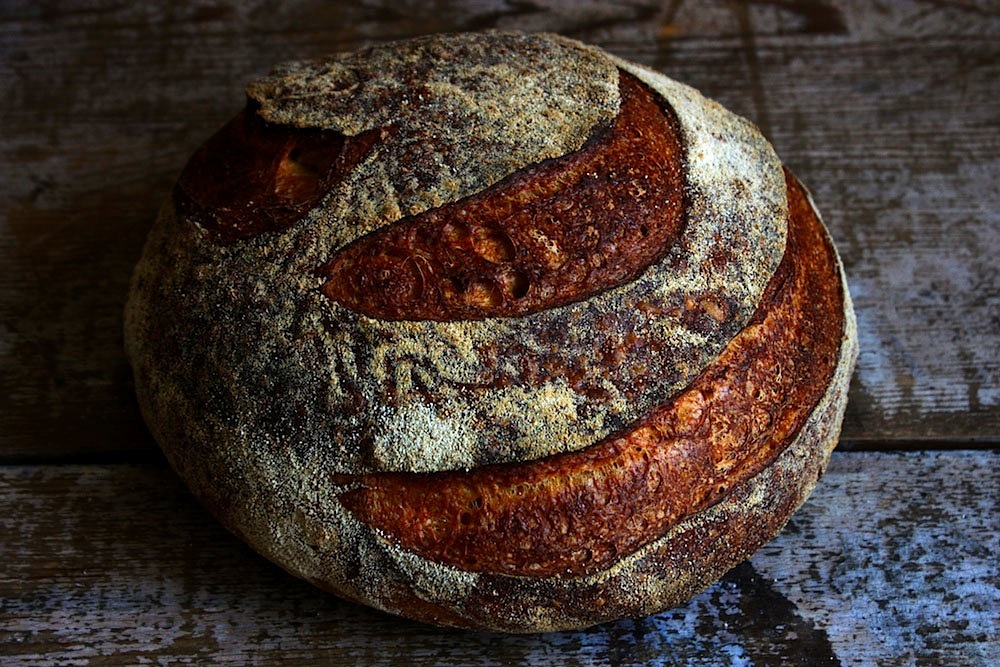 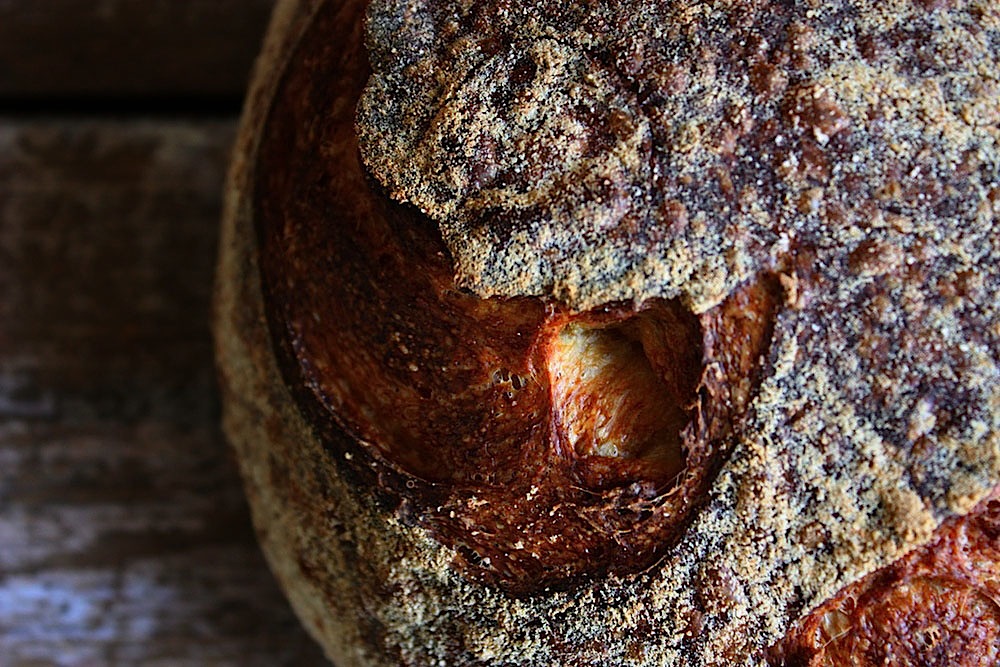 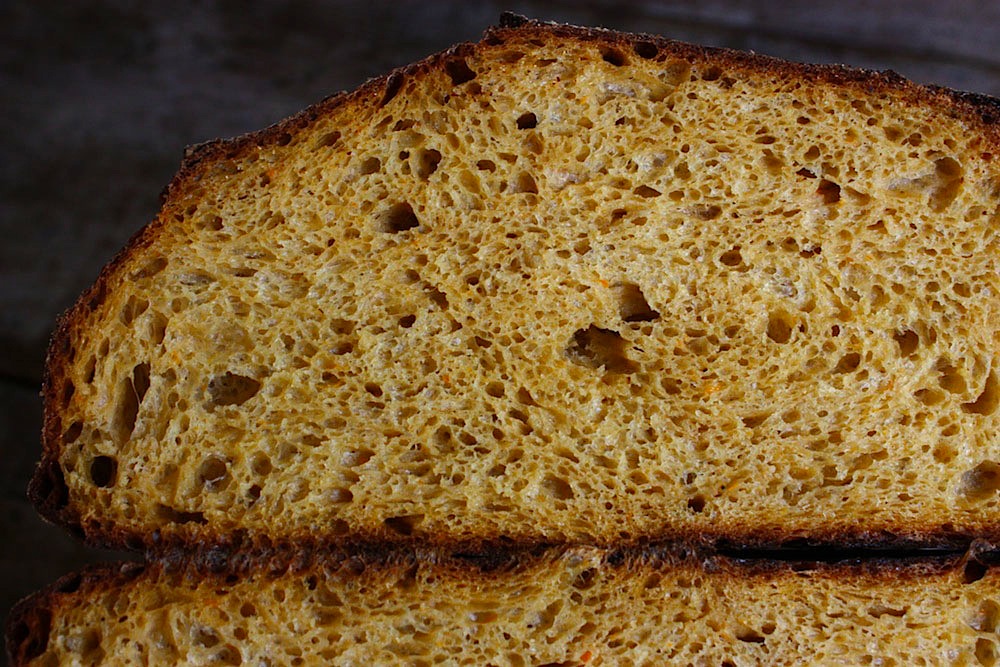 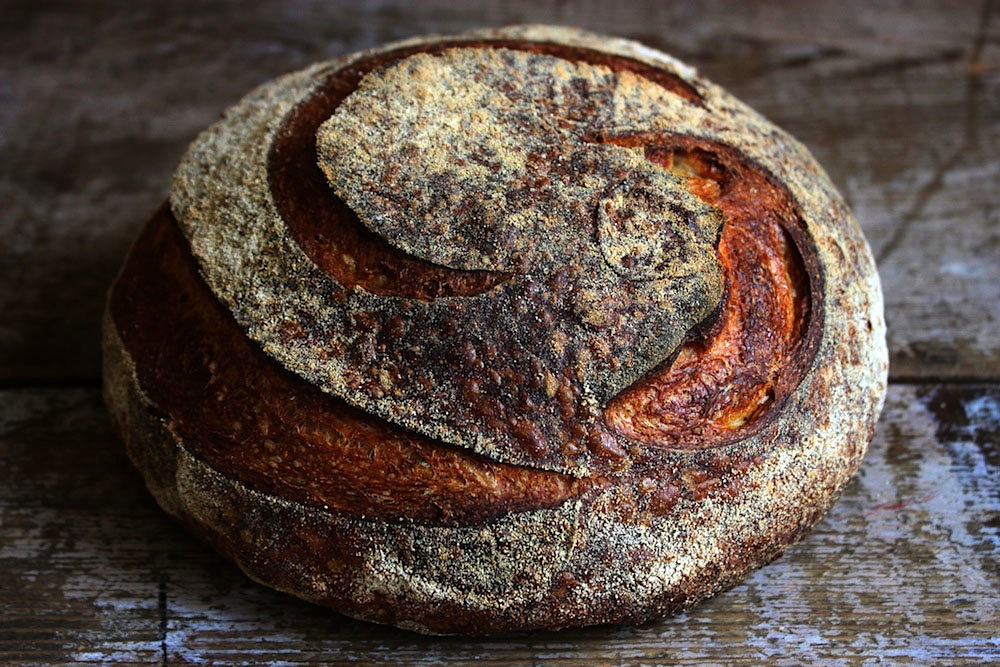 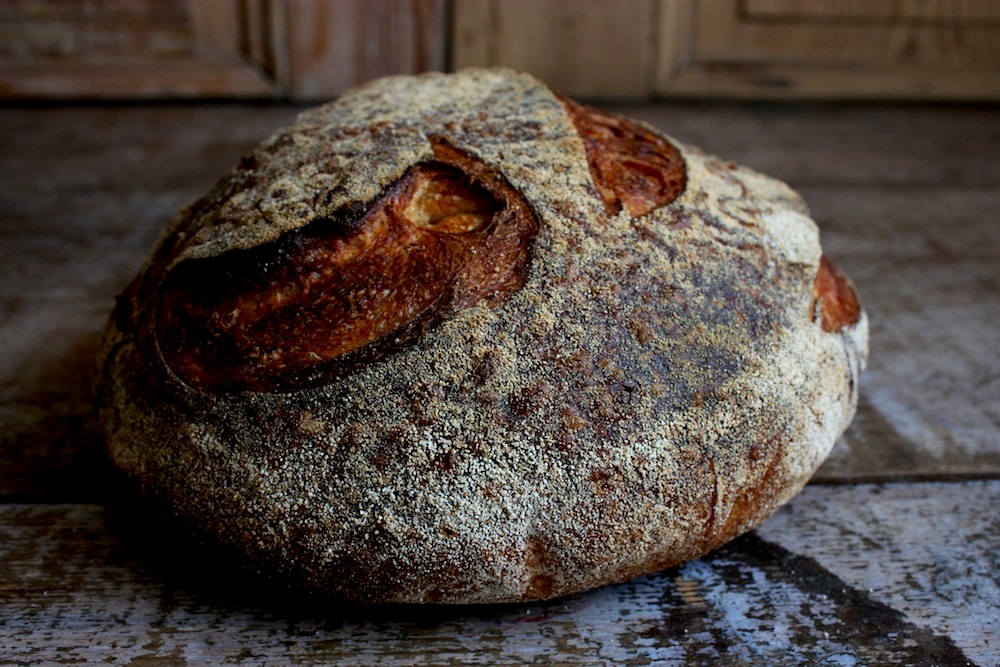 to the staff of life!

(this sweet post has been shared at wild yeast blog's yeast spotting)
Posted by France at 7:46 PM