Am I too late? I don't know. L.A. is like a remote bubble, totally cut off from reality (in numerous ways). Like, our growing seasons are long if not indefinable. You can get tomatoes at the farmer's market now, and that's just weird. I am a Bay Area girl to the marrow, and tomatoes are a fruit that definitely belong to St. Martin for his protracted summer feast. 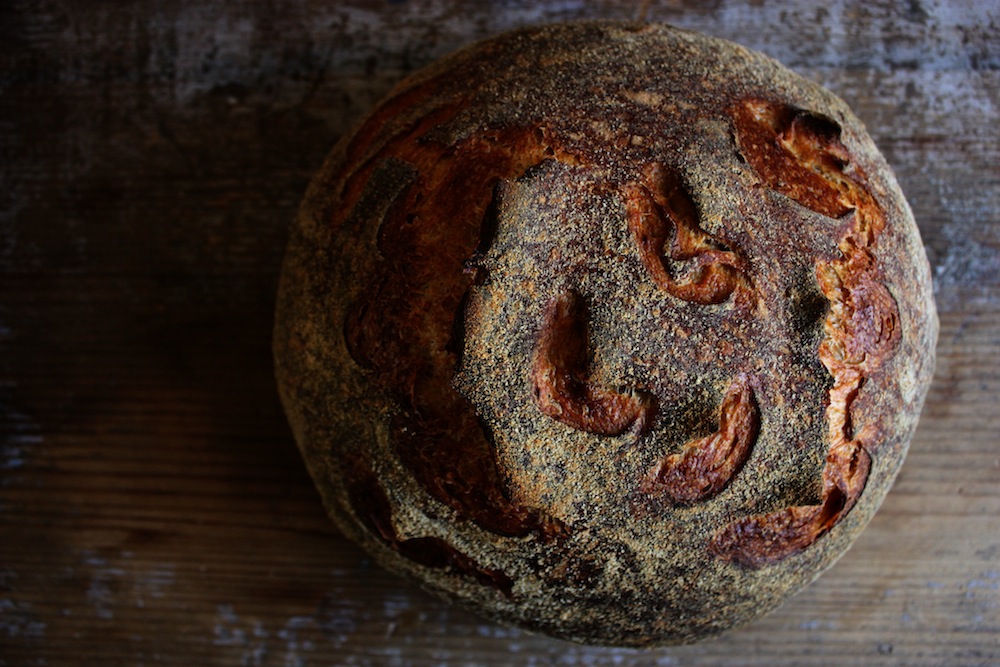 A Boule of Farro & Garlic Scape

So, we are having a warmish start to our feverish seasons. Things from the vine are offered earlier than in other parts of the world, and they will likely be at my disposal well into the celebratory season where others are thinking of turkey, shinily wrapped gifts and credit card debt. This season I got far too many garlic scapes that should be alloted one person, and I used them for sundry projects, namely this one that I am sharing with you today. 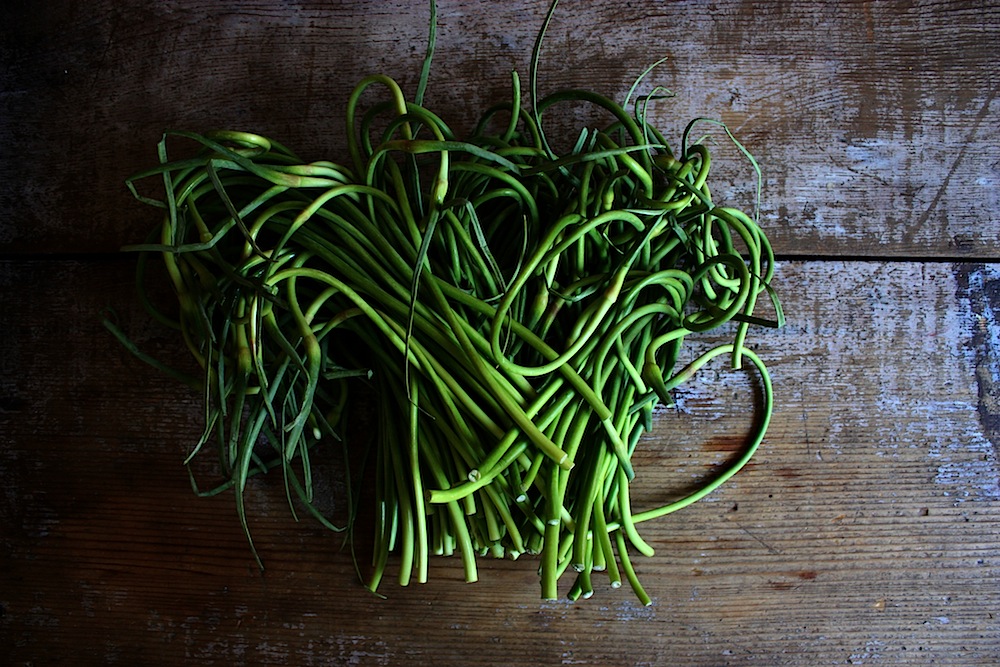 Garlic scapes are the long shoots that sprout from the top of new garlic, curling in upon themselves and topped with devilish finials. They are long prized in Chinese cooking, which means that it was inevitable that the western world should discover them, make them posh, expensive, unattainable. What do they taste like? Well. Garlic. Of course. I mean, they don't taste like chicken that's for sure. They are a powerful shoot, bright and fresh and crisp and begging to be tossed into things here and there in effort to elevate them. 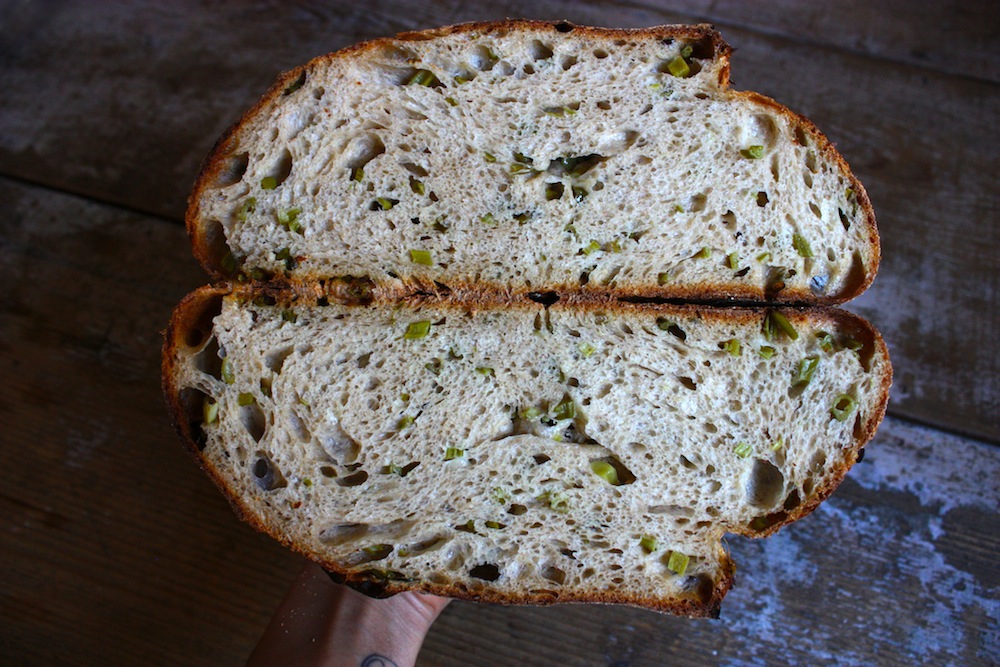 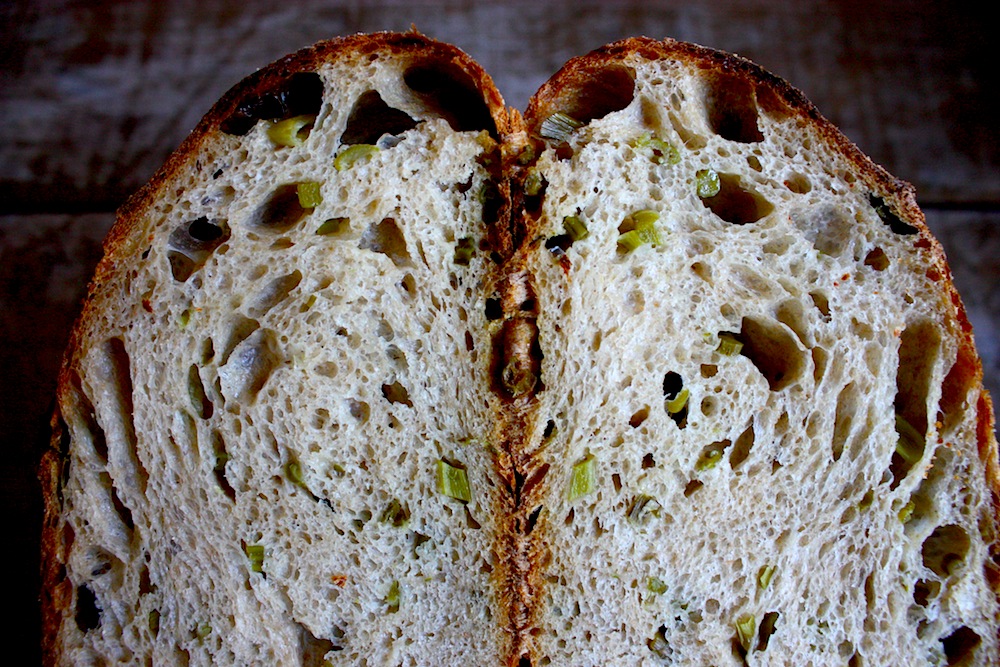 Our garlic scapes were linked here with farro. Because of their vigor, I think they are best paired with a grain that will enhance and confront them all the same. Farro meets their boldness and compliments their intensity with nuttiness and earth and sweet. Divine.

I milled my own farro flour for these loaves. Unfortunately, I don't know of any company that will supply those of you without mills. ** UPDATE: Theory, our baking friend, has just informed me that you can get farro milled to order from Bluebird Grain Farms!

Otherwise, you might try spelt flour, which you can get from To Your Health, and which is one of my absolute favorite flours to employ in my breads. Had I no mill, this is what I would have done. 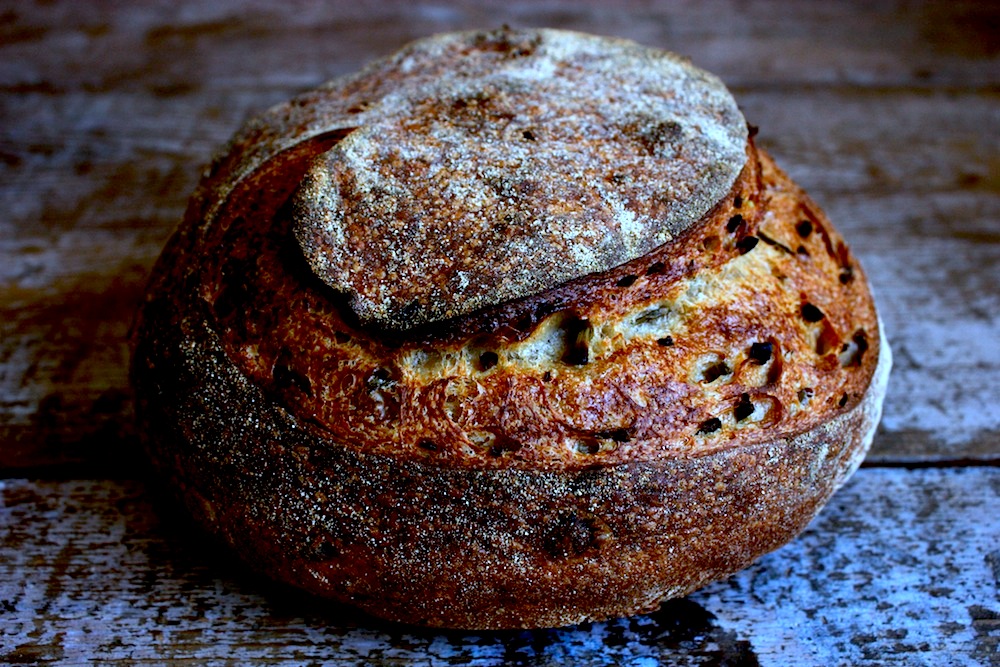 Hey, on a final note, I wanted to give a shout out to Franck Haie who wrote me such a beautiful note about the rye starter that is the basis of my whole blog. The breads in Chad's repertoire are based on a whole wheat/white starter. When I discovered rye, I began to really get my 'bread legs', so to speak. Rye and I linked up arm and arm and we have been lovers ever since. It thrills me to hear that so many of you have found a lover in rye as well, so I also want to thank all of the people aside from Franck who have taken the time to write to me about their success with 100% rye starters, and there have been many. Evidently there are scores of people who have not been able to make bread until the discovery of a rye starter. I am honored to have been able to help you along your bread path. This is why I continue to write the blog. If not for your comments and emails, I would probably have stopped it long ago. So long as there are people who are having bread awakenings with their rye starters, then I will always be here posting new experiments so that your bread world is limitless and fulfilling. 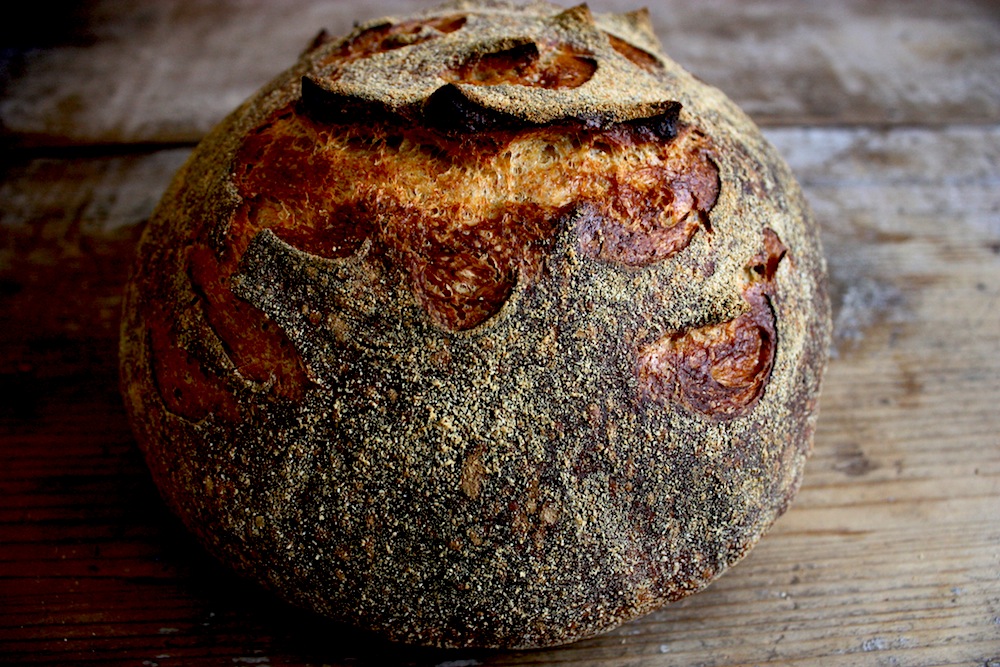 Three days before you plan to make your levain, throw your starter into overdrive by feeding it three times each day. On the third day, build your levain:

Mine fermented for about 6.5 hours 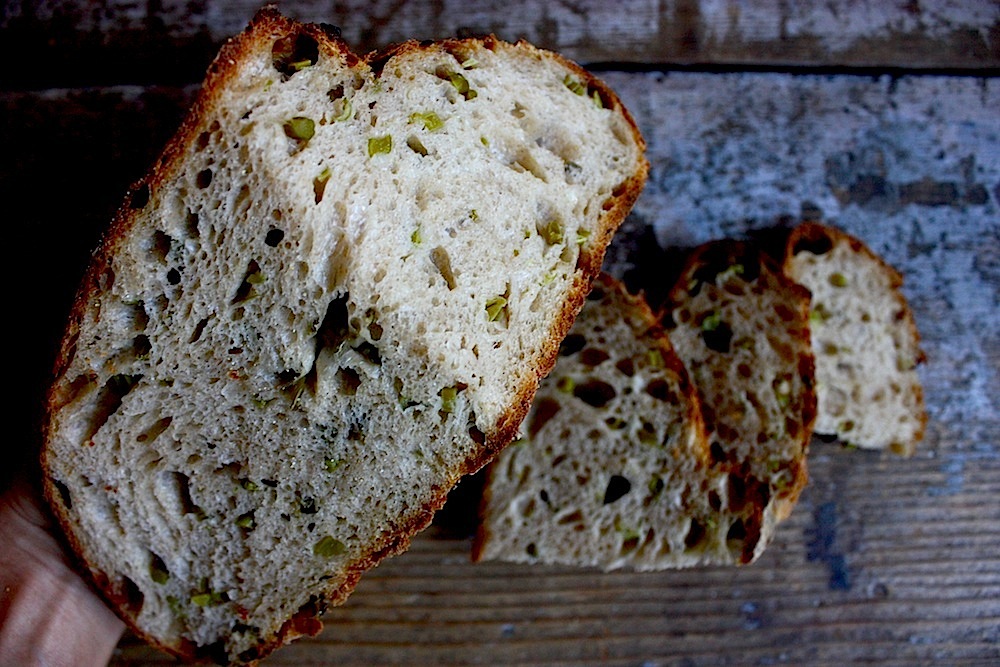 All of the levain

After the autolyse, squish the salt into the dough so that it is thoroughly incorporated, then fold in the of scapes, working to keep it all in within the dough as much as you can. It's fine if a few pieces peek through, but by the end of the bulk, the majority of it should be encased in the dough or the bits will burn on bake day. Now begin your 4-hour bulk fermentation. Here you will perform a series of turns until the dough really starts to expand and feel tight. You will intuitively know that this is the time to stop your turns. Now let the dough ferment for the remainder of the bulk.

After the bulk fermentation, scrape the dough onto a worktable that you have dusted with brown rice flour, gather it into a loose round and let it rest for about 10 or 15 minutes.

After it has rested, shape it into a taut boule, and pop it into a banneton or abowl lined with a linen that has been dusted with brown rice flour. Get it into the fridge and ferment 15 - 18 hours. Mine went for 18 hours.

Snip or score the dough, the slide it into the shallow end of the combo cooker. Cover with the fat end and steam the loaf at 500 degrees for 15 minutes. Now turn the oven down to 475 and bake for another 15. After the steam, remove the lid and bake till chestnut brown. You may have to toggle the oven between 450 and 475. Take the internal temp to 210 - 212 degrees. 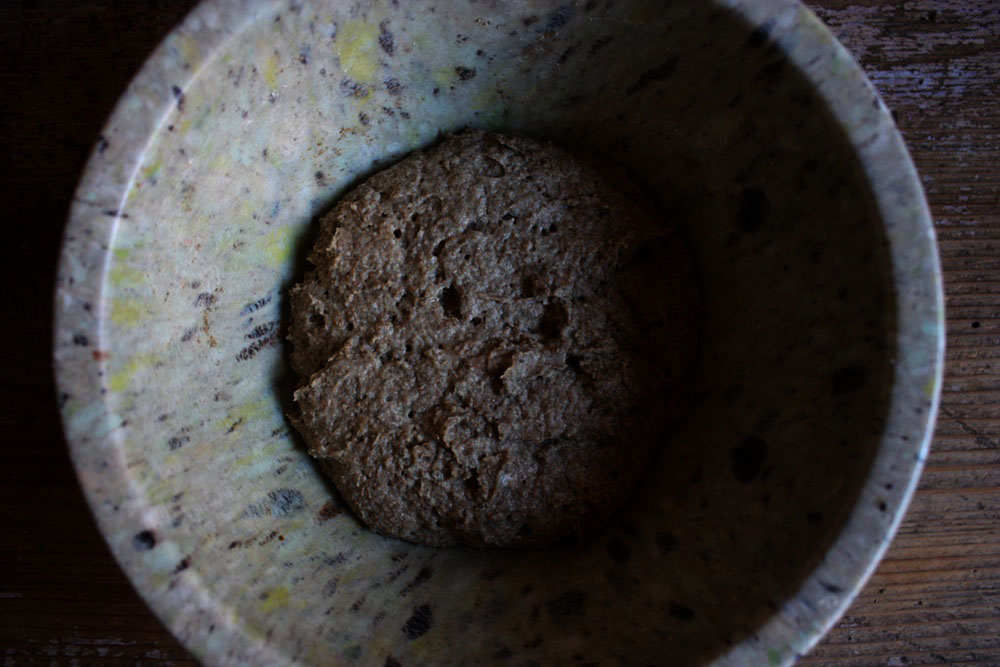 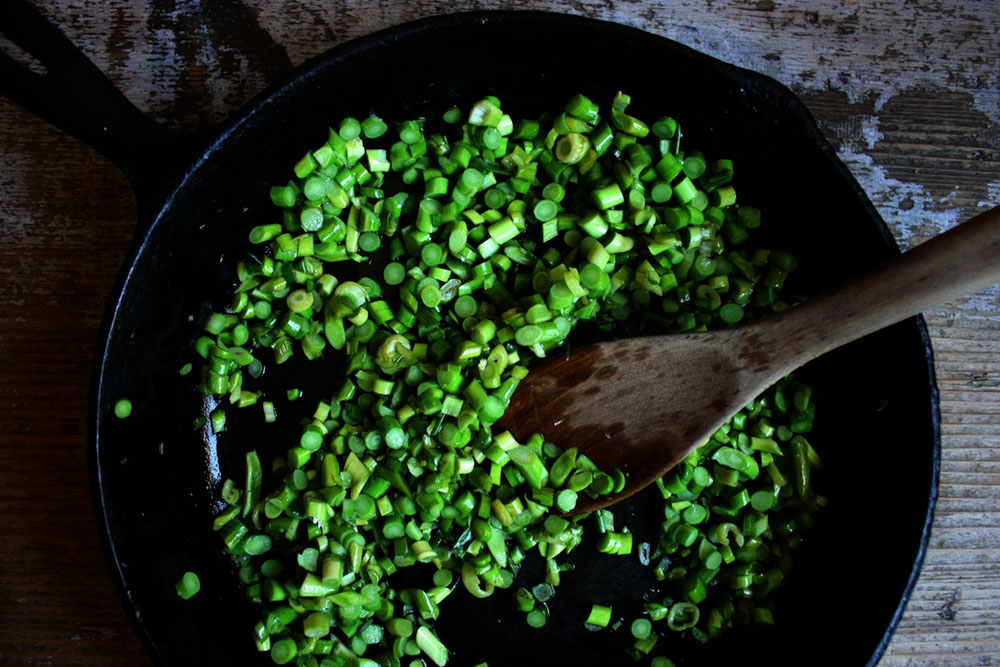 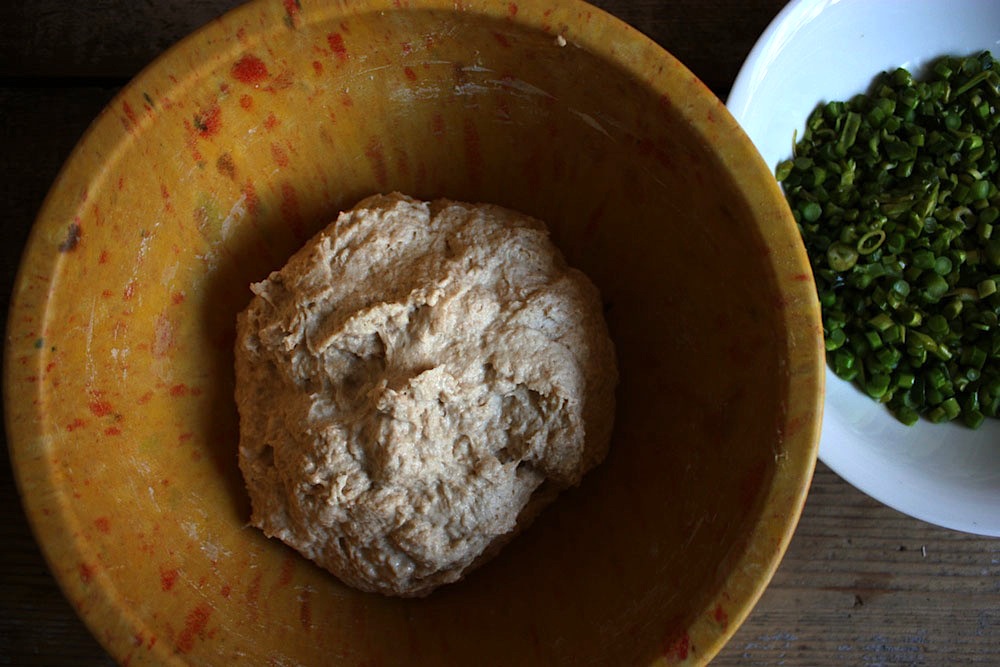 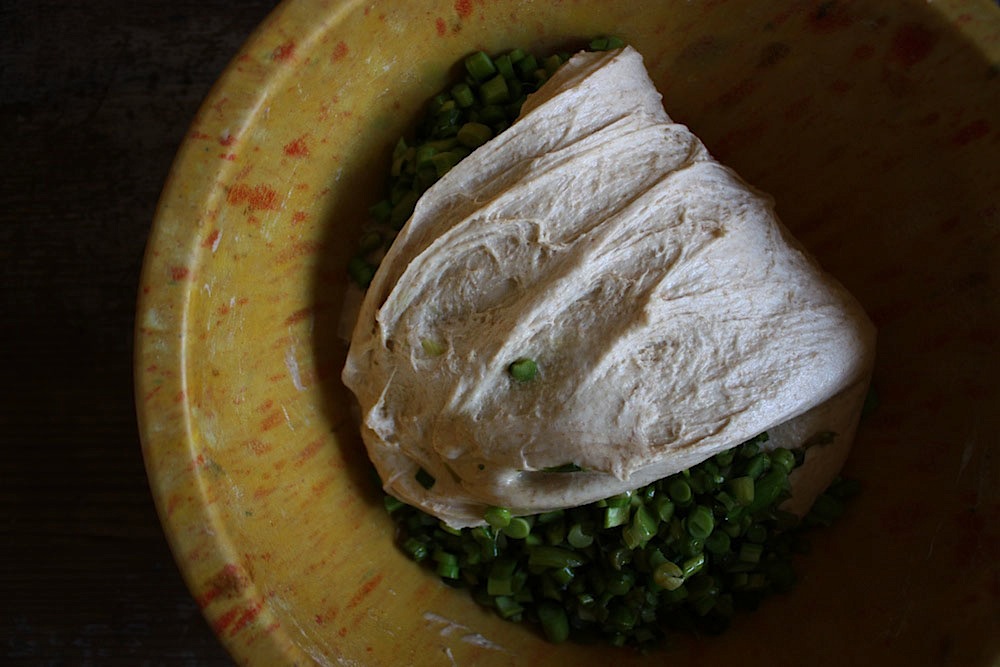 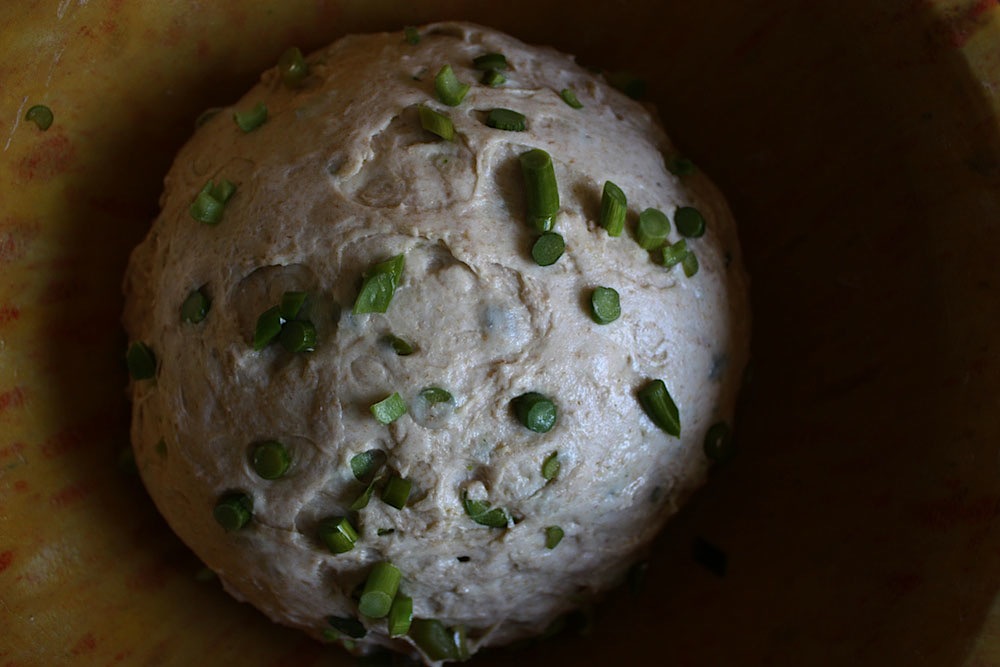 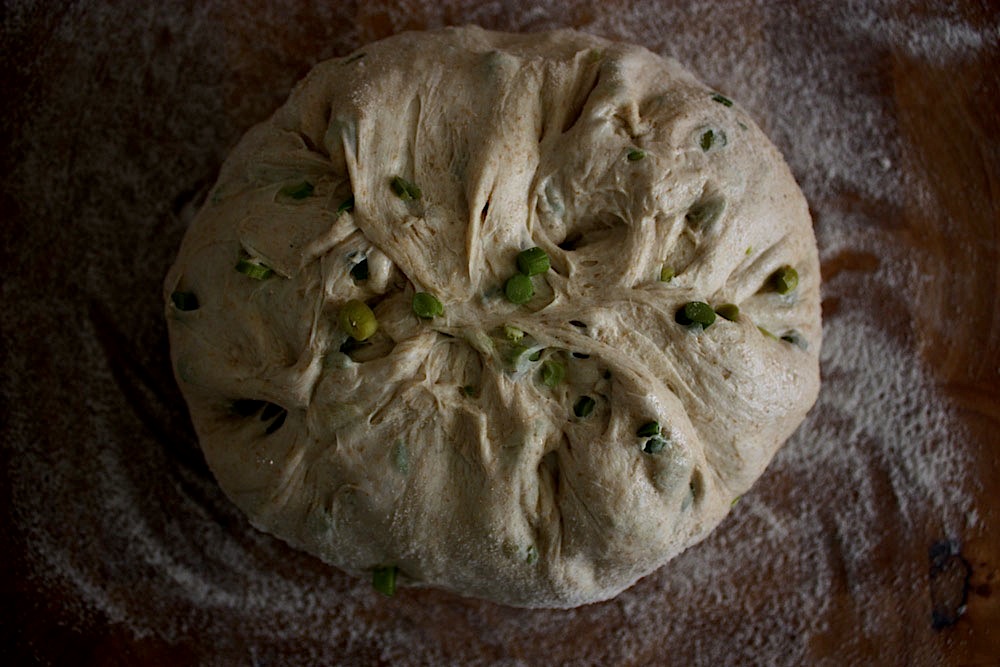 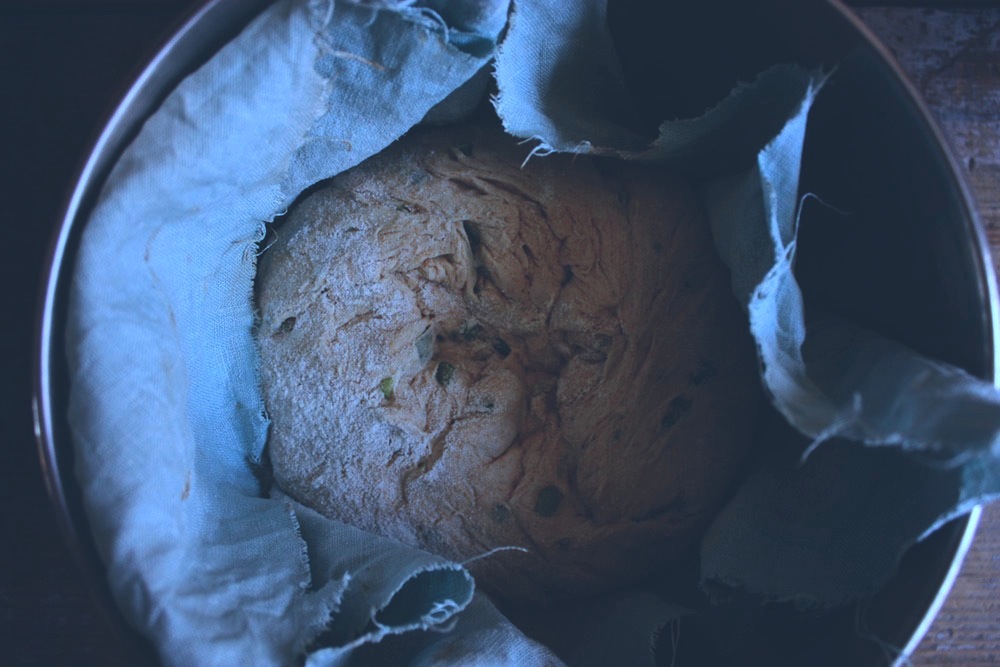 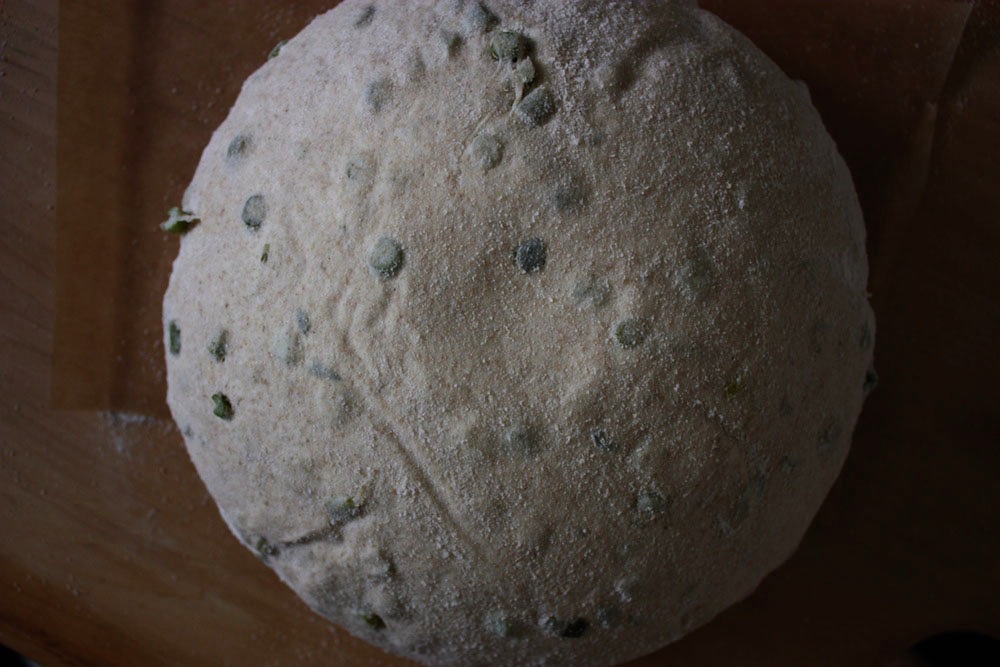 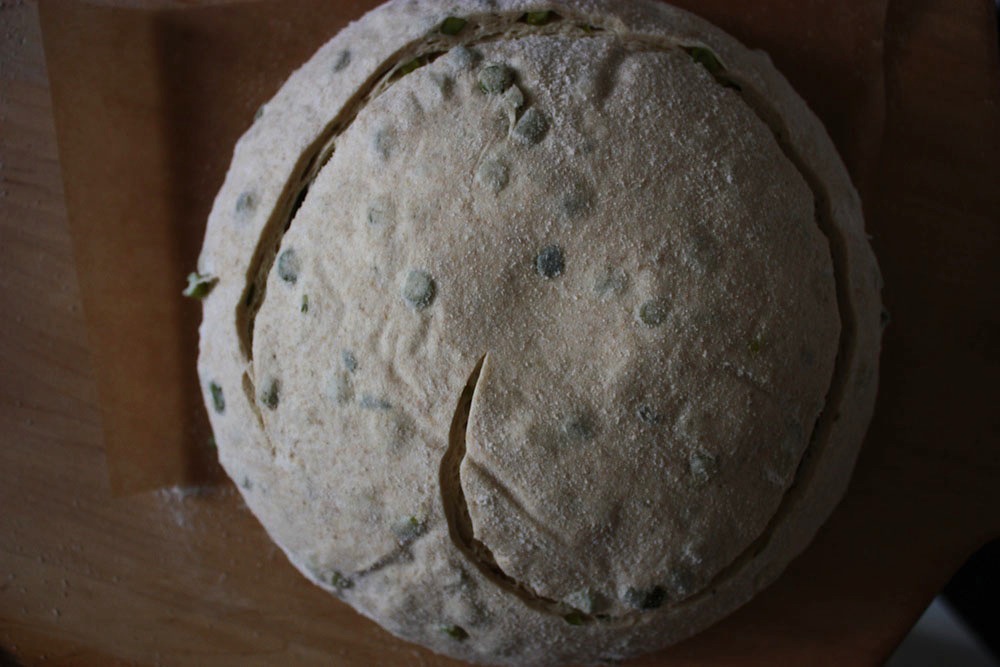 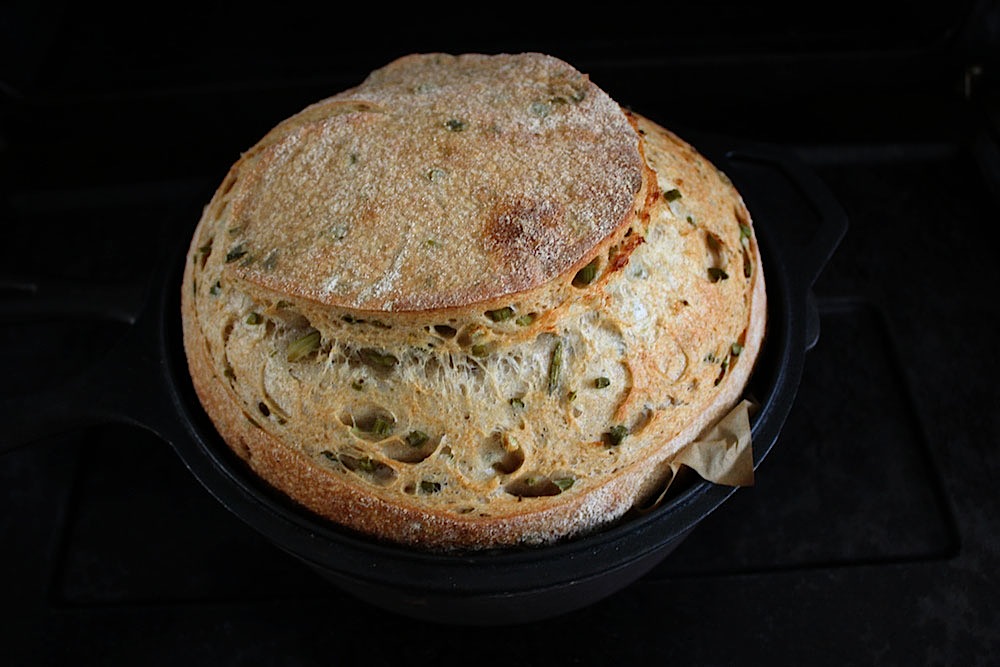 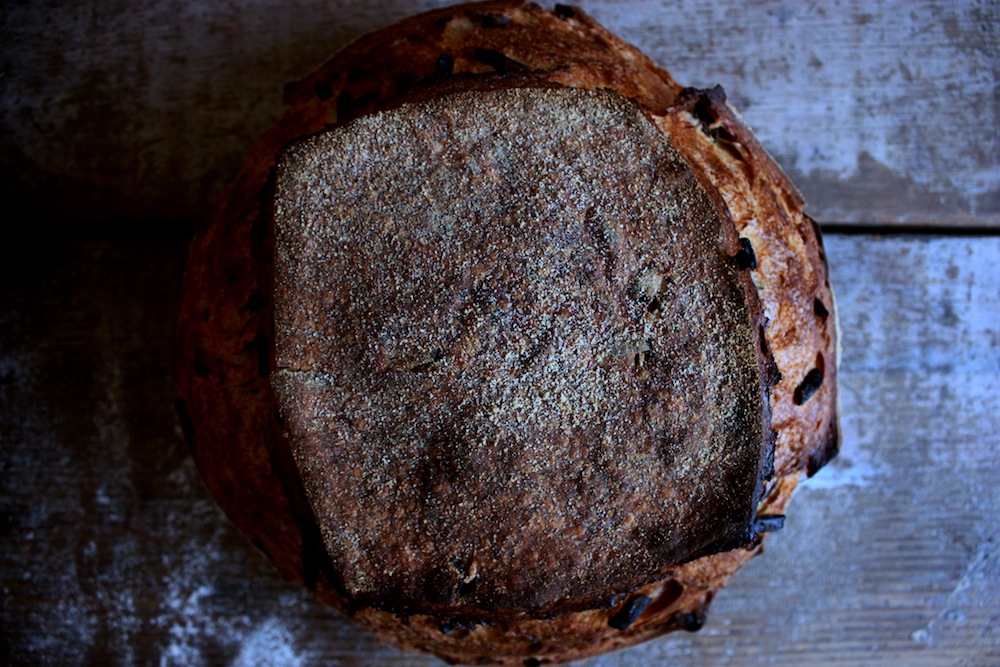 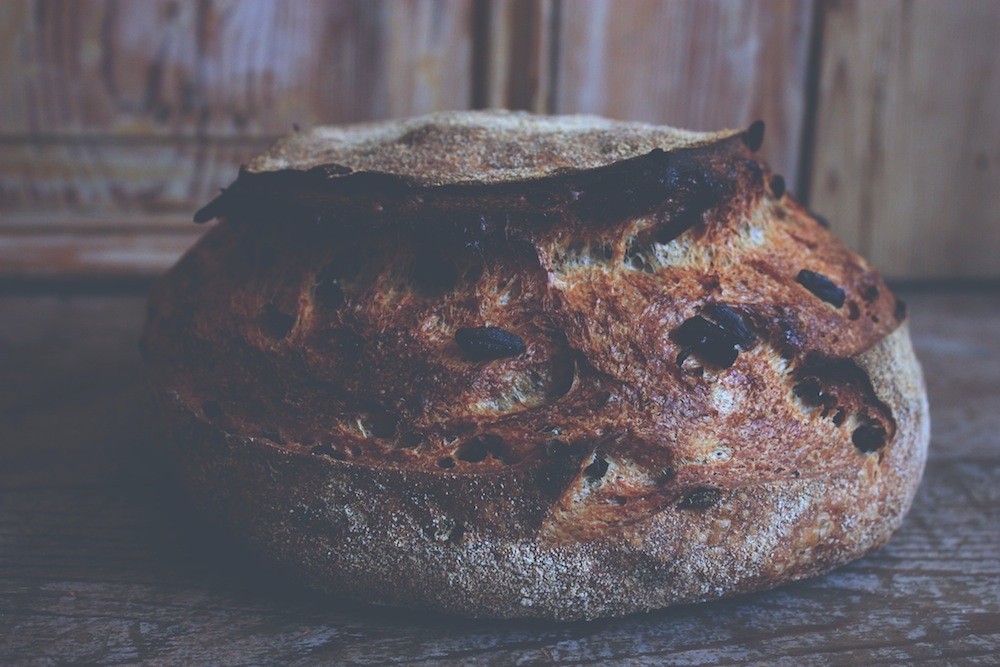 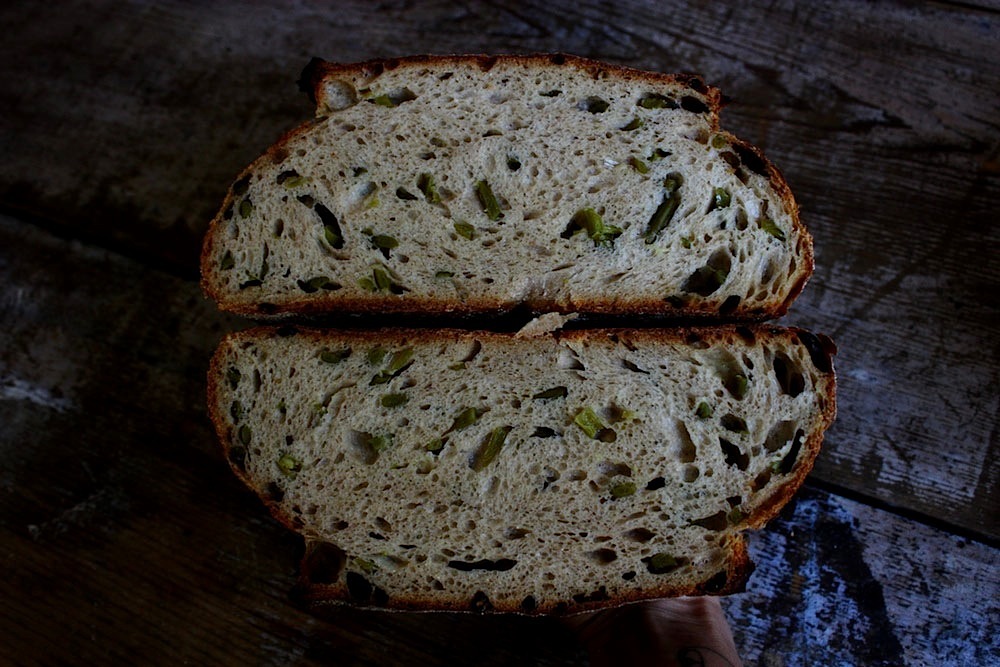 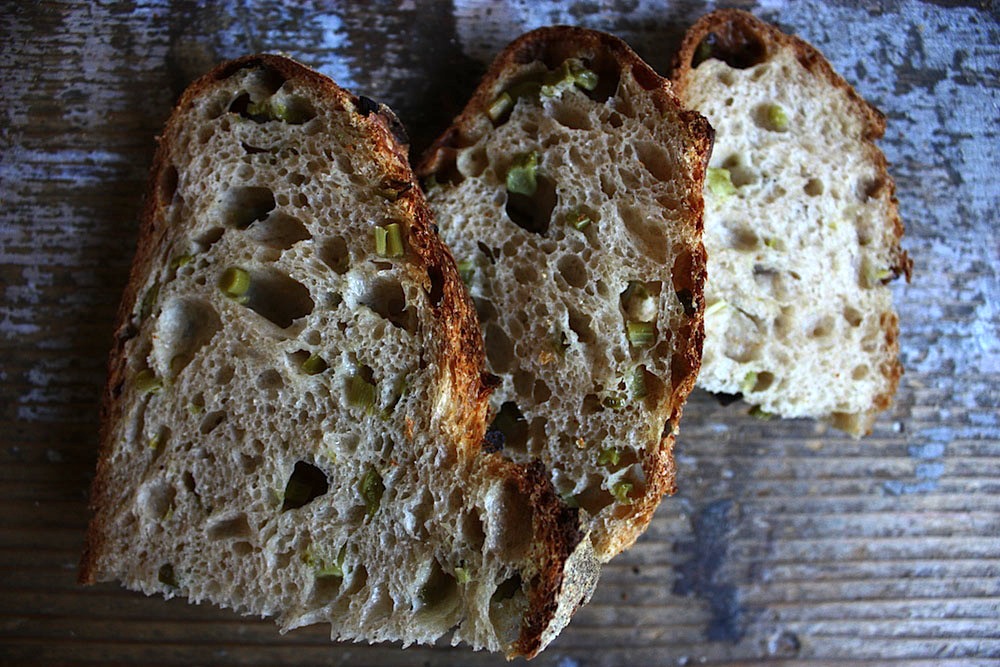