OK. When I say 'fendu', I use this word gratuitously. As you all know, I suck at shaping anything other than a boule. Batards, baguettes, forget about it. I am fairly unambitious with bread shaping, so I never get better at it. Which is fine by me. But every now and again I fancy that I'm an actual baker, and then I am humbled when I try to do something outside of a neat little ball. 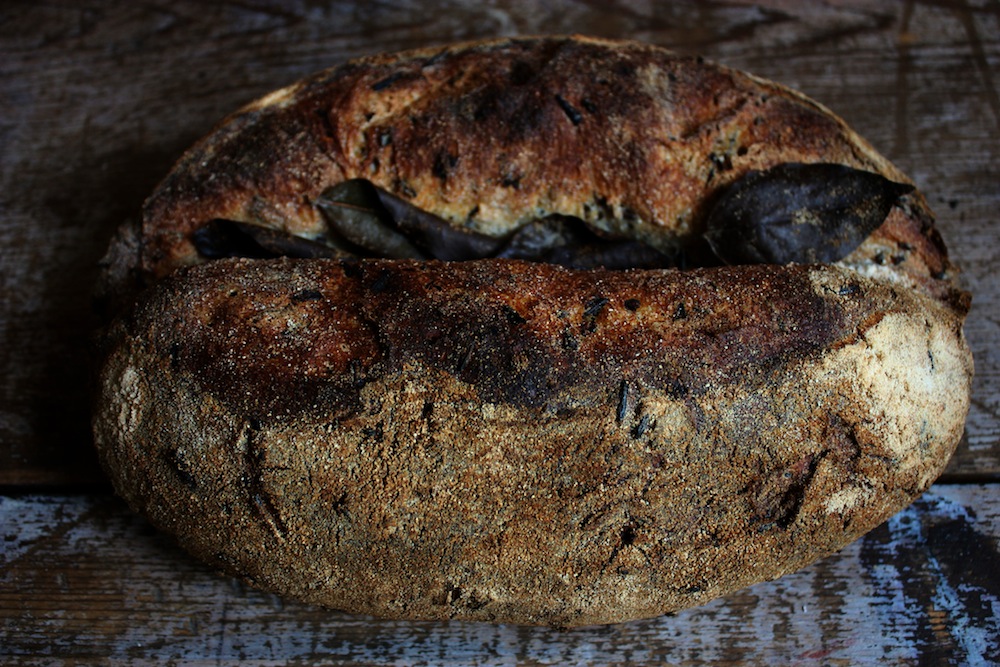 So, this week's bake brings two new things to the blog. I had this fantastic idea for a wild rice loaf flavored with fresh bay because I have a beautiful laurel bay plant in my kitchen, and wild rice just sounds lovely. At first I thought I might just cook some of this black grass up and add it to the dough, but then I got the wild idea to mill some of it up into flour to further enhance the loaf. 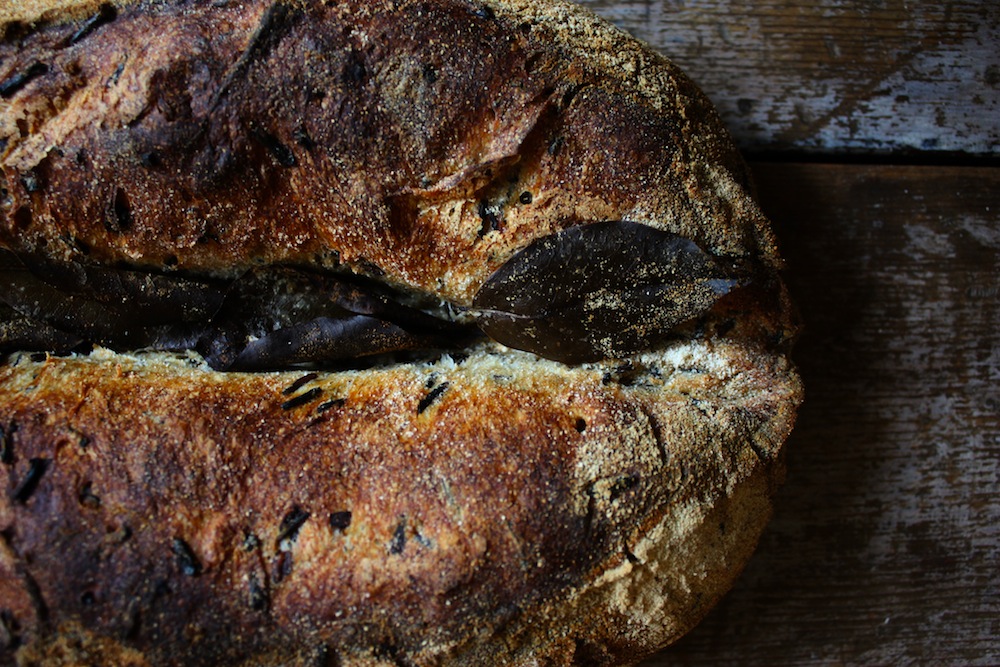 When thinking about the bay, I knew I didn't want to stash any inside the actual loaf (i.e., if I decided to go with a boule), because slicing into it would result in woody bits in the mouth. No Good. This brought me to the grand idea of fendu. In my crazy imaginings, I would shape it perfectly, encasing a few of the aromatic leaves within the split. It would proof up smashingly, hugging the leaves through the bake, whereafter I would pluck them out and wind up with an exotically-flavored bread. 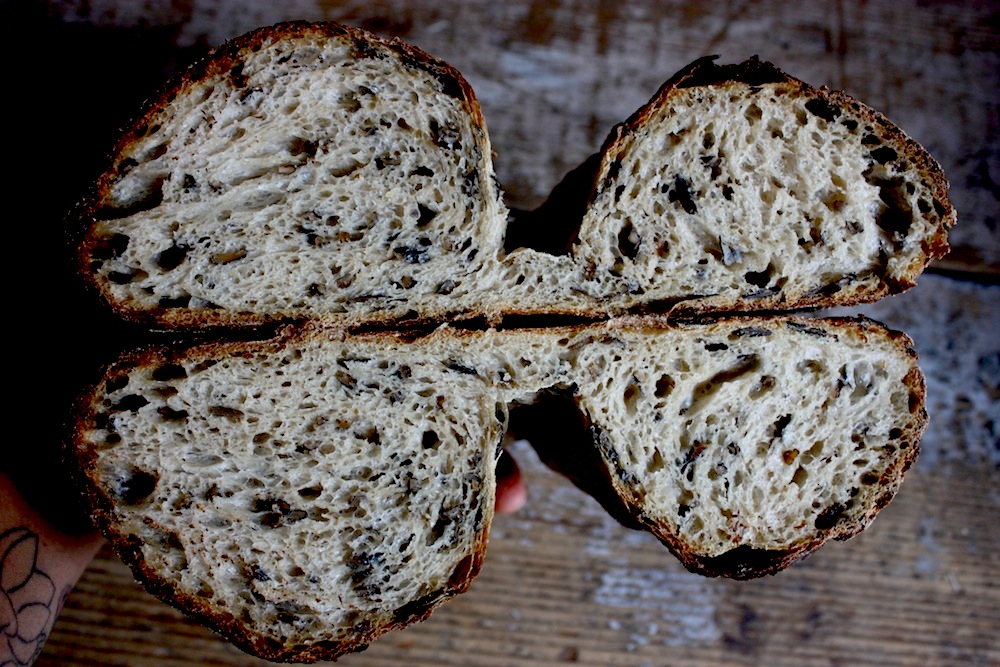 Well, most of this was true, only my fendu opened up during the bake. After the steam I was a little dismayed, but when all was said and done, despite my lack of shaping prowess, I was tickled pink with the resulting loaf. 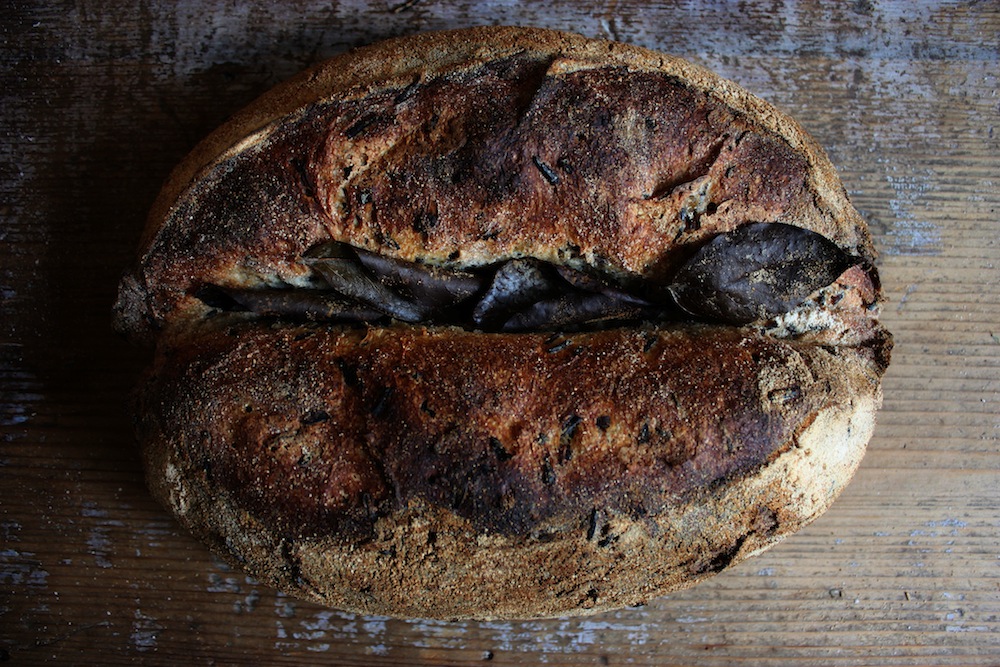 The cool part of the experiment is that I got to work with another method of steam. Our combo cooker has been our crutch for so long, and I have tried every method of getting steam into my oven with very poor results. All of my non-boule breads end up spreading with the lack of steam, and the resulting loaves are always flat. This time I used lava rocks that I doused with ice water when the dough was loaded into the oven, and the bread achieved marvelous oven spring (happy face). This may be the start of a new love affair with alternative shapes, now that I know what glorious steam the lava rocks create in the oven.

So, let me describe the bread: in a word, heavenly. But beyond that, the crust was super shattery, and such a wonderful ratio of crust to crumb. I was worried that the rice bits would be super tough on the outside of the loaf, but nothing could be further from the truth. While working with whole grains in my breads, I do try to encase as much of the grains within the dough when I turn and shape because they can bake out a little tough. Here, the bits that remained on the outside of this loaf added a pleasant crunch to the already crisp cortex. 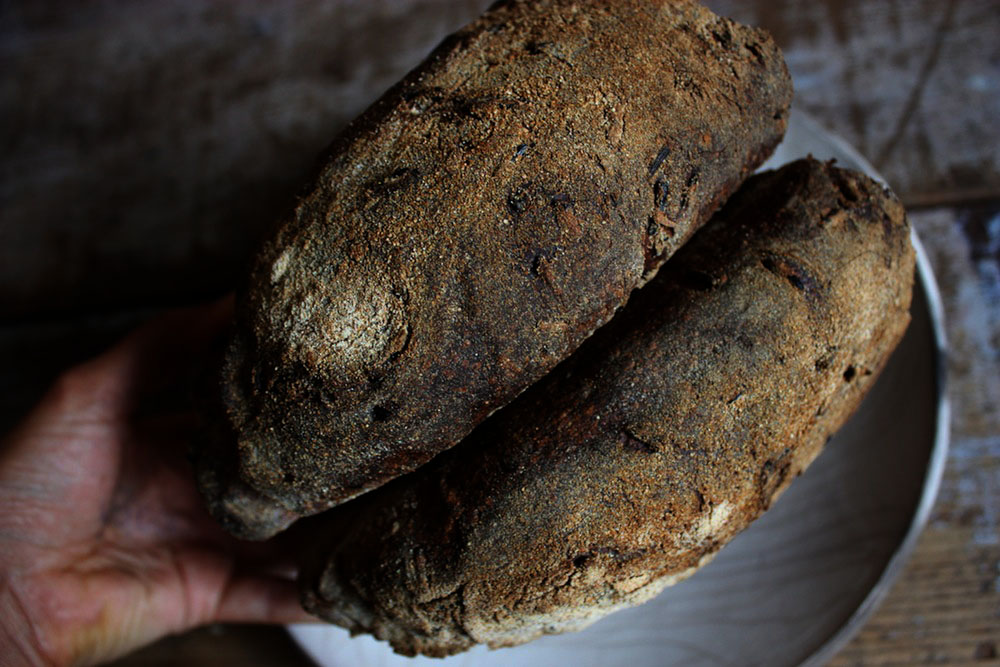 The crumb was superbly tender and open, and the flavor, wow. A sweet earthy quality from the wild rice, and the bay permeates the loaf delicately, lending a lovely resinous and spicy perfume. 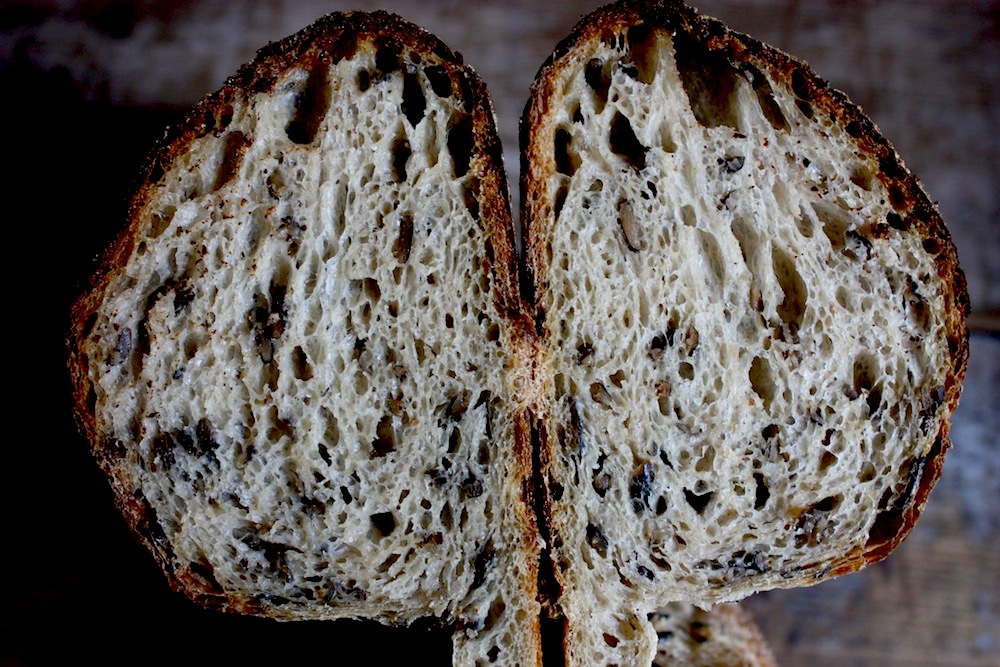 For this bread I milled up some white whole wheat (Bob's Red Mill hard white wheat berries) along with the wild rice. I also used Giusto's Ultimate Performer and Golden Haven. I added just a pinch more salt that I normally do to compensate for the addition of the wild rice. I never knew I could bake up such a glorious thing!

Without further babble, here is the method for our wild rice & bay fendu in all its glory. 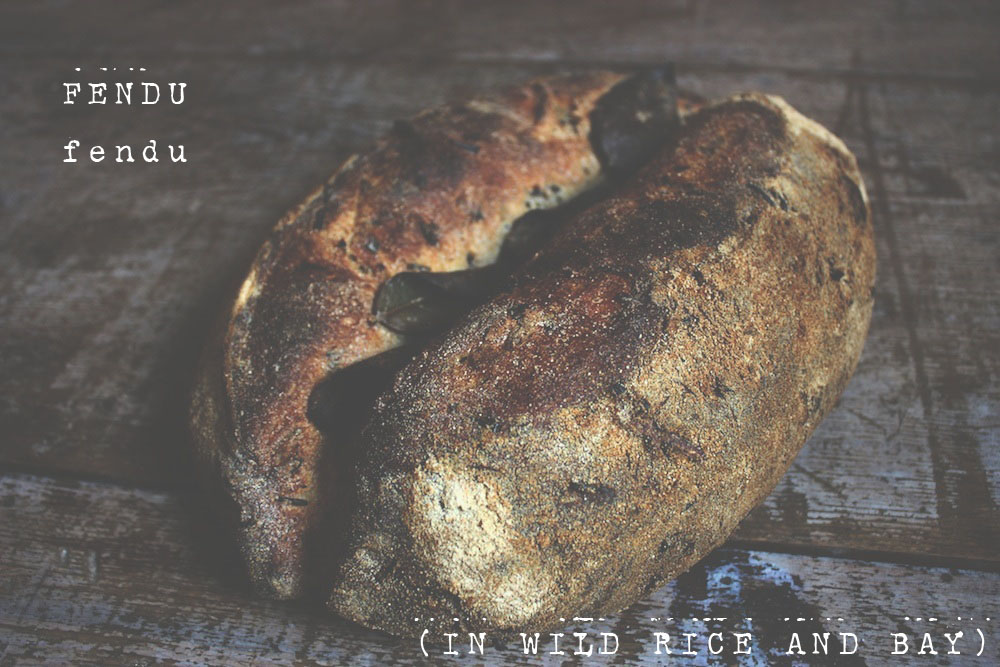 
Three days before you plan to make your levain, throw your starter into overdrive by feeding it three times each day. On the fourth day, build your levain: 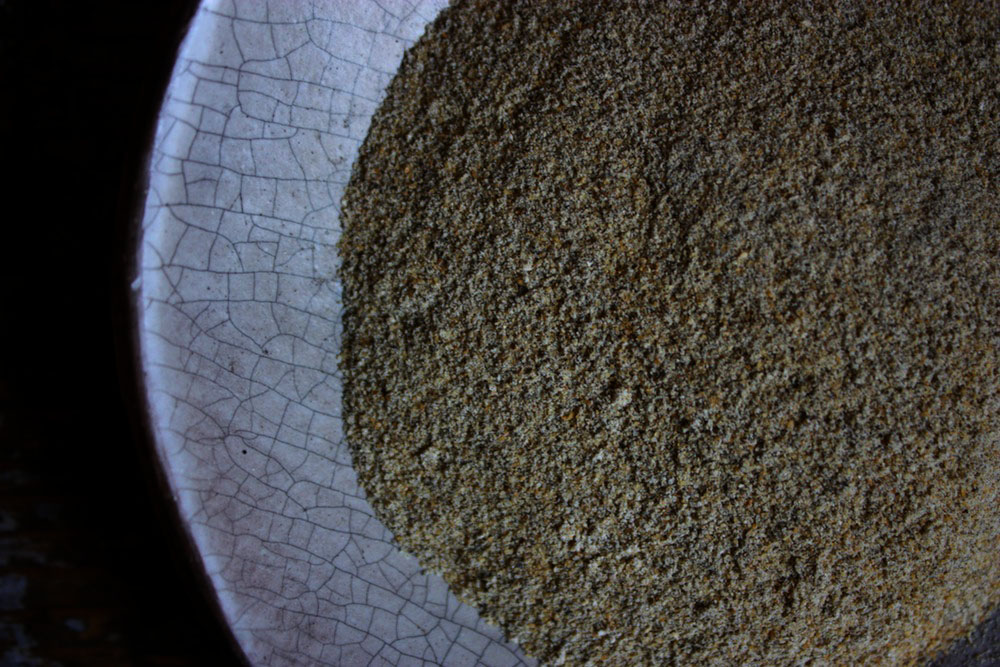 When the levain is at its peak, mix it with the flours and h2o until you reach a shaggy mass. Autolyse for one hour. During this hour, make your wild rice. 4 parts water to 1 part wild rice. To arrive at what you need here, you will need 2 cups of water and 1/2 cup wild rice. Cook till tender, about 45 minutes, drain and rinse with cold water using a fine-mesh strainer. Set aside.

After the autolyse, squish the salt into the dough so that it is thoroughly incorporated then fold in the wild rice. 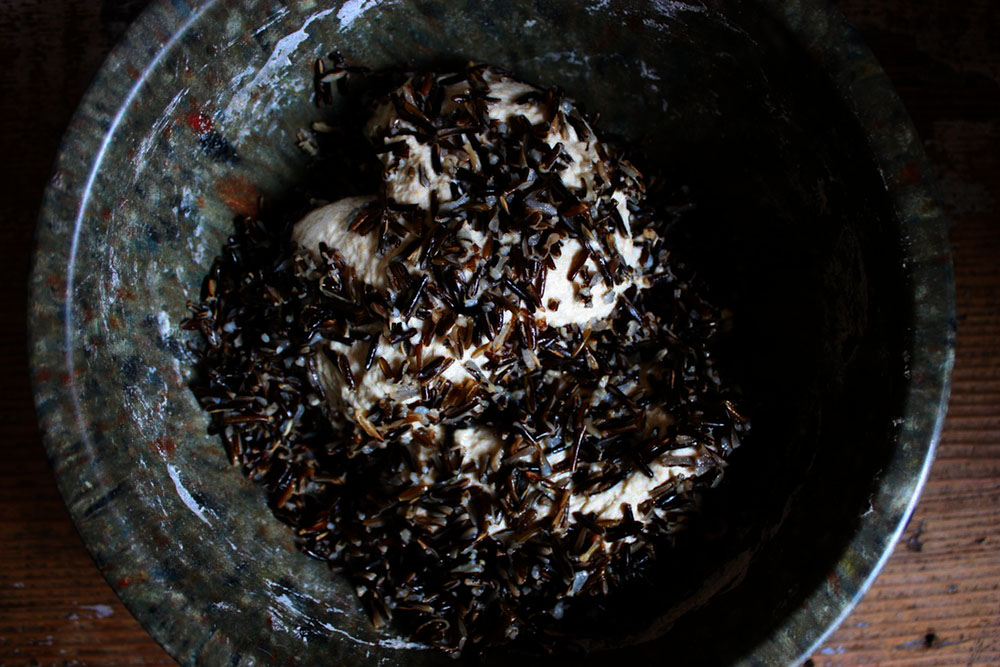 Now begin your 4-hour bulk fermentation. Here you will perform a series of turns for the first two hours of bulk. Leave it be for the final hour. My bulk was done at room temp for the most part, even though it was in the 80s here in L.A, but I did refrigerate it for the last 45 minutes because it began to expand rapidly at this point. 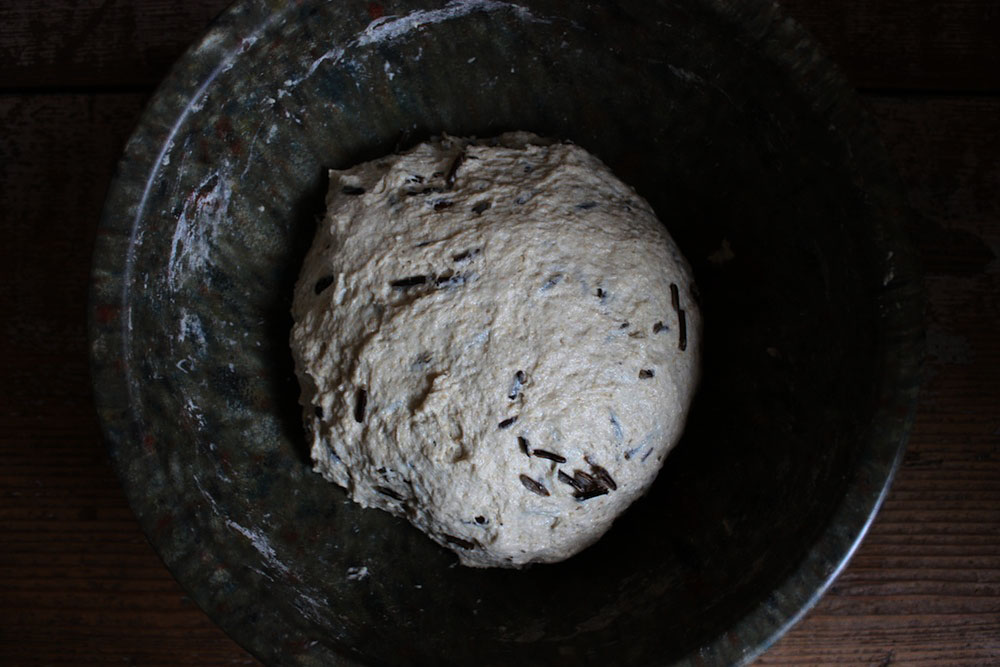 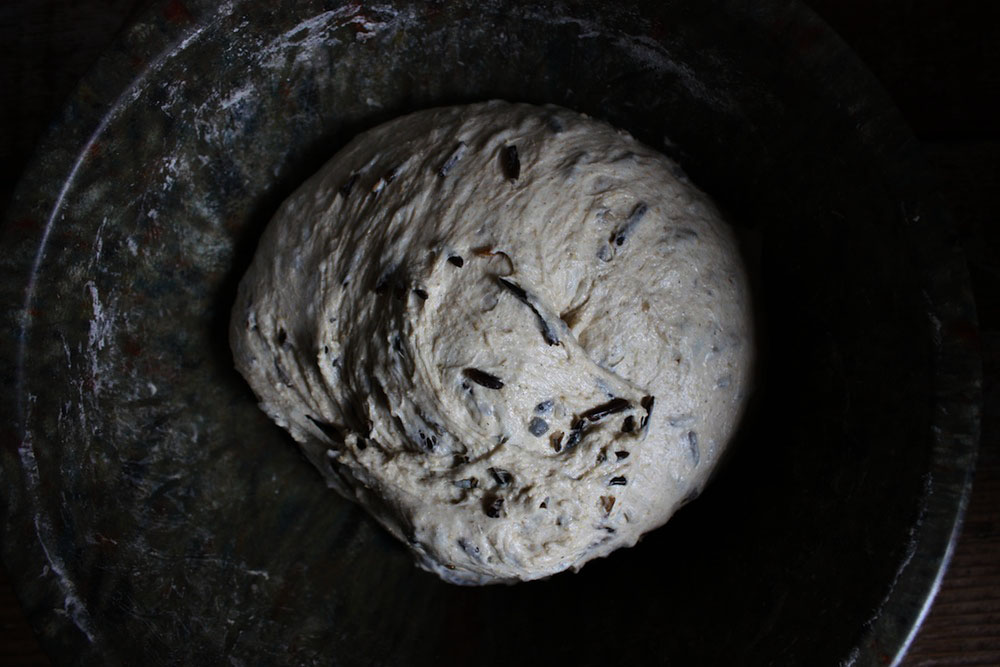 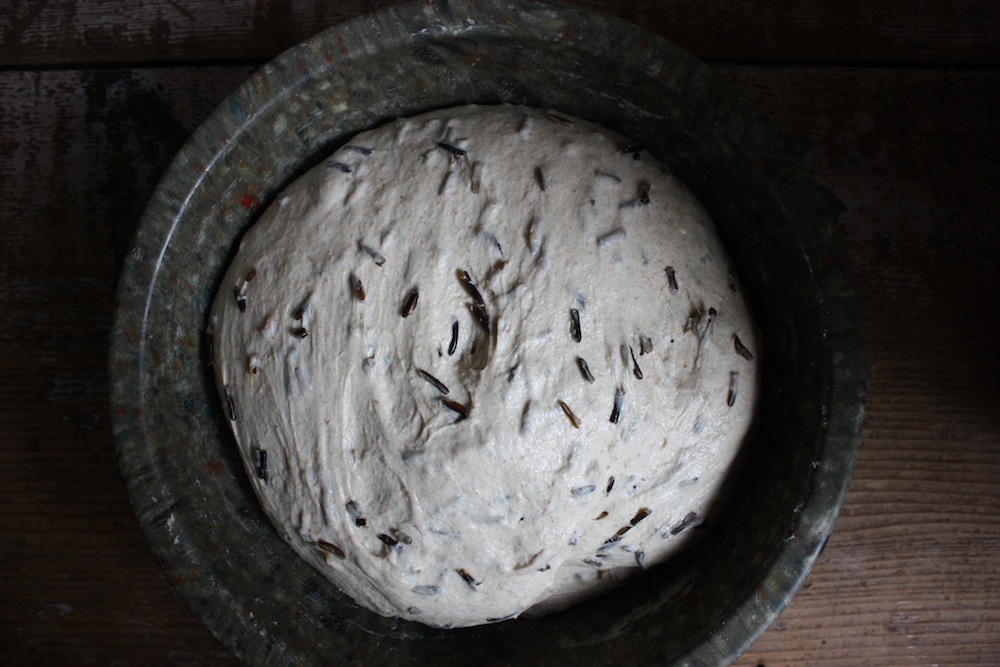 After the bulk fermentation, scrape the dough onto a worktable that you have dusted with brown rice flour, gather it into a loose torpedo shape and let it rest for 10 minutes.

After it has rested, shape it into a neat batard. Now, flip the dough seam-side down, and using a dowel or a thin rod of some sort. All I had was a French rolling pin. Likely part of the problem. Make a wide moat in the dough by rolling the dowel back and forth, trying to maintain equality on both sides of the moat. As you can see, I was not as fastidious as I should have been and ended up with one more shallow side. When you have accomplished this, roll either side of the dough back toward the center firmly, then slip in a few bay leaves. This is where I started to have trouble. My seam would not stay closed, and the sides of my dough kept rolling open relentlessly. So I ended up pinching the ends of the torpedo before placing into the banneton. This is going to take more practice. 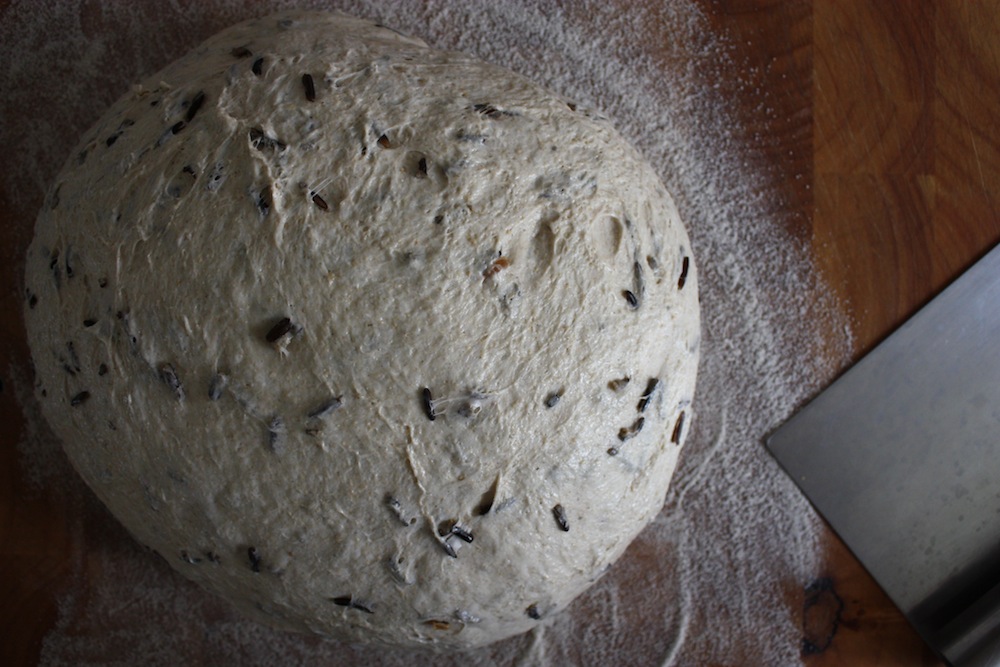 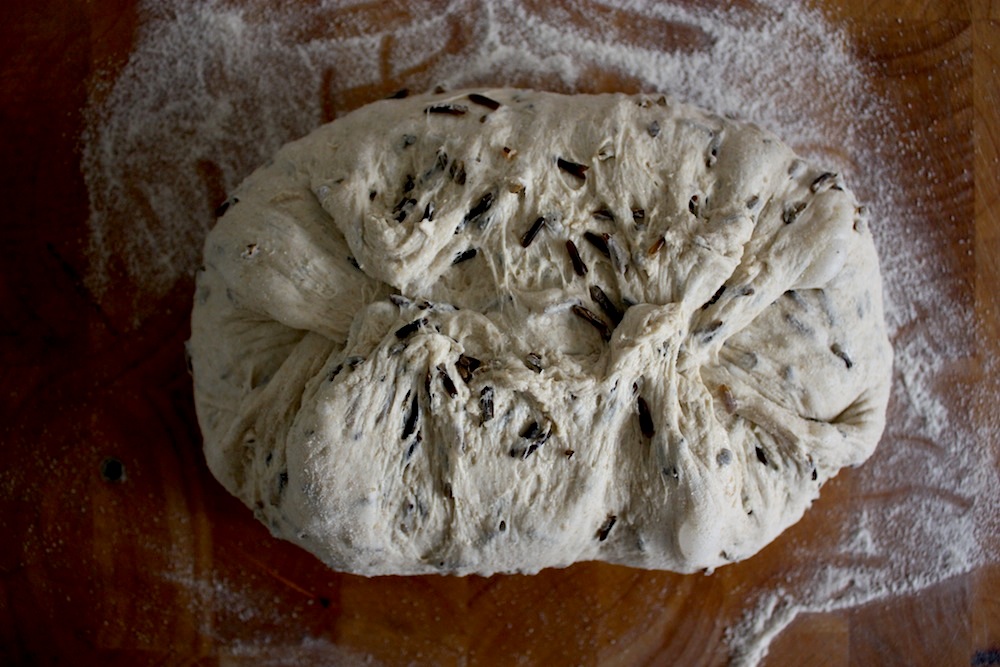 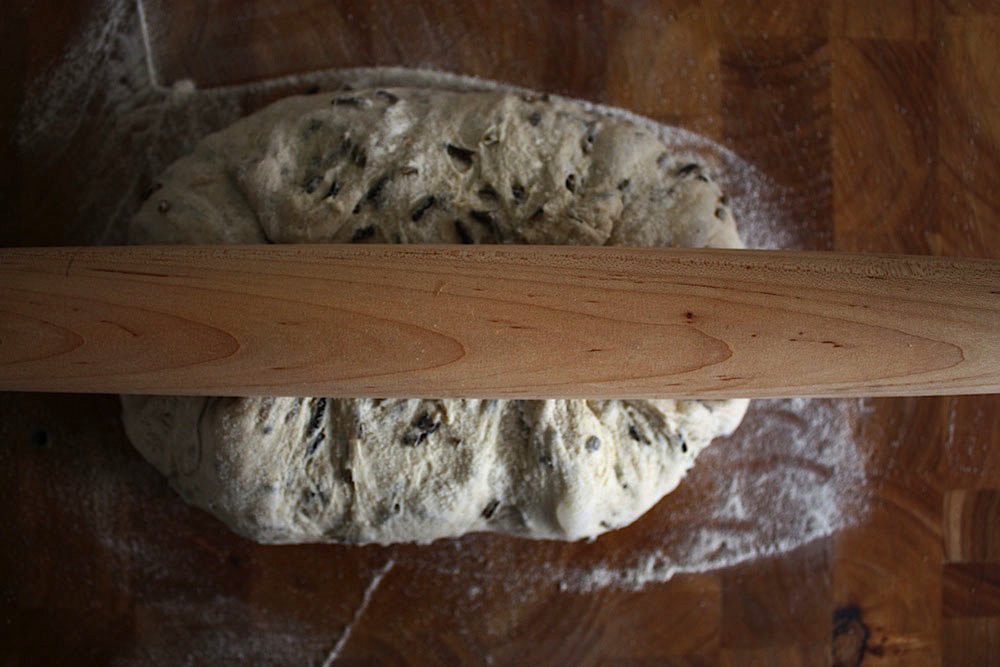 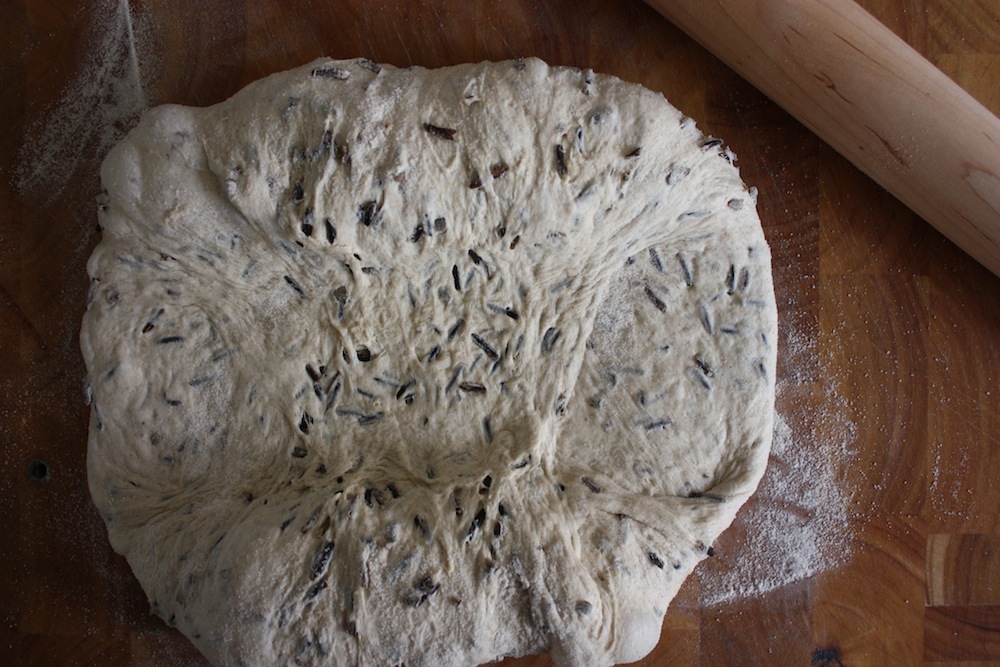 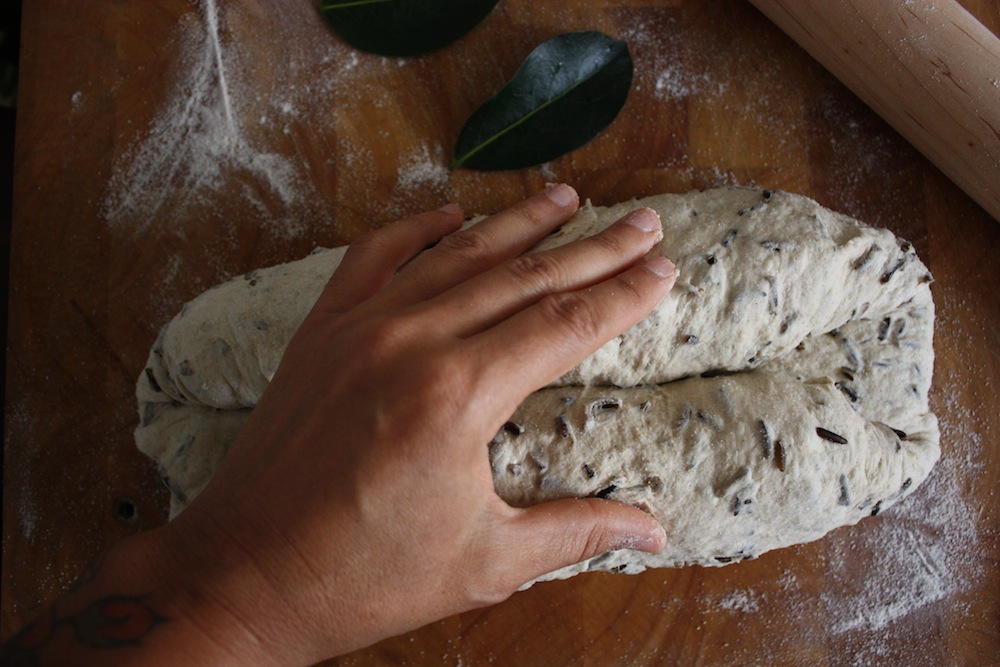 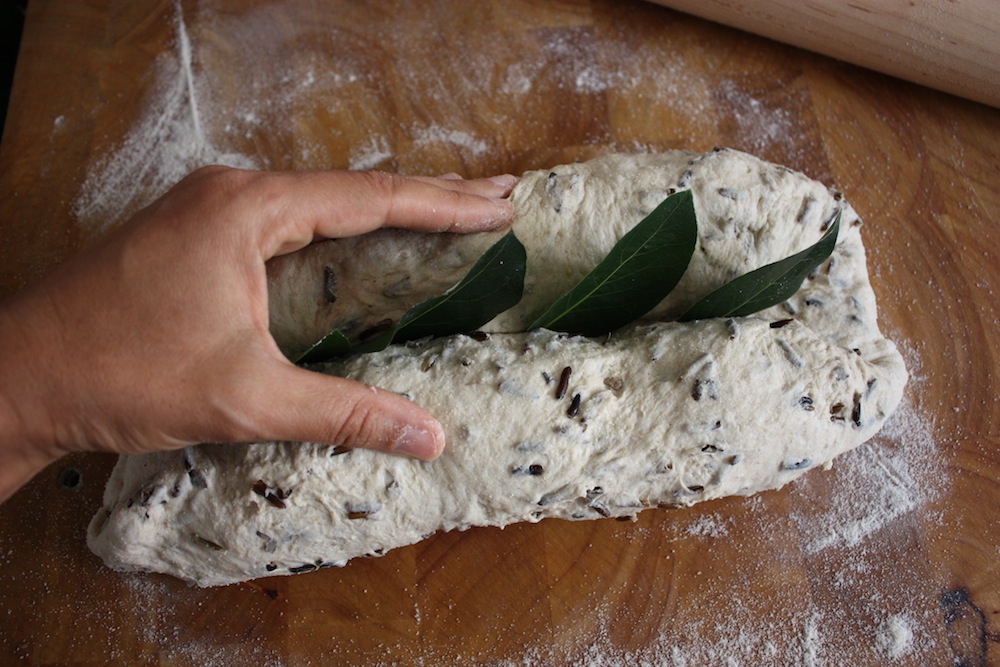 Place the dough seam side down, being careful not to dislodge the leaves, so that when you flip it on bake day, it will land seam/leaf side up. Moving along... pop it into a banneton, which, incidentally, I don't have. I used my Staub 4.5 quart oval roaster lined with a thick piece of canvas, and inserted rolled up pieces of this canvas into the sides of the pot so that the dough would not expand too widely. 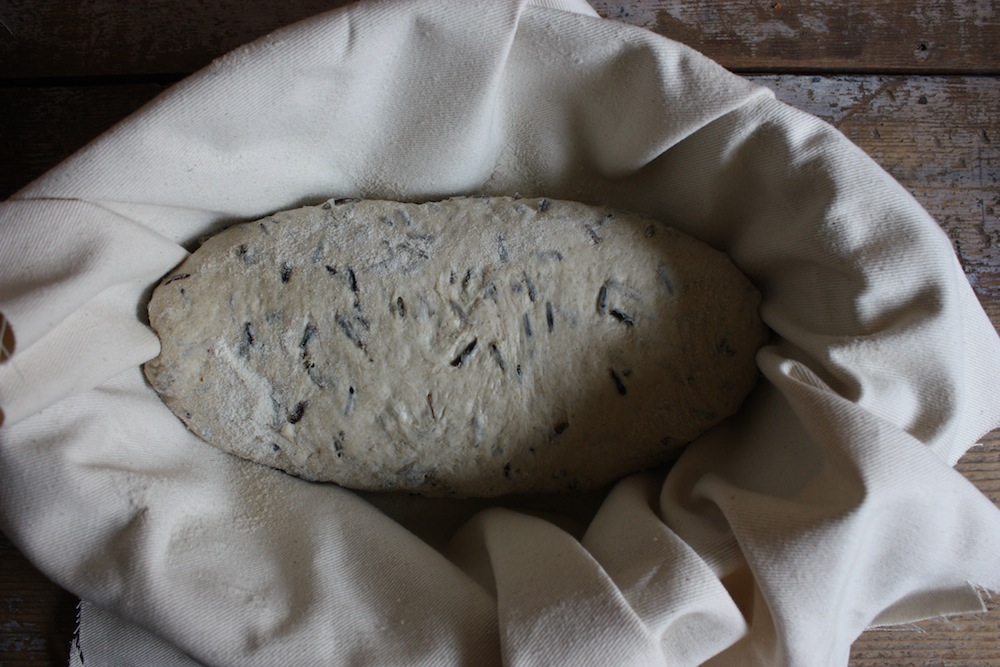 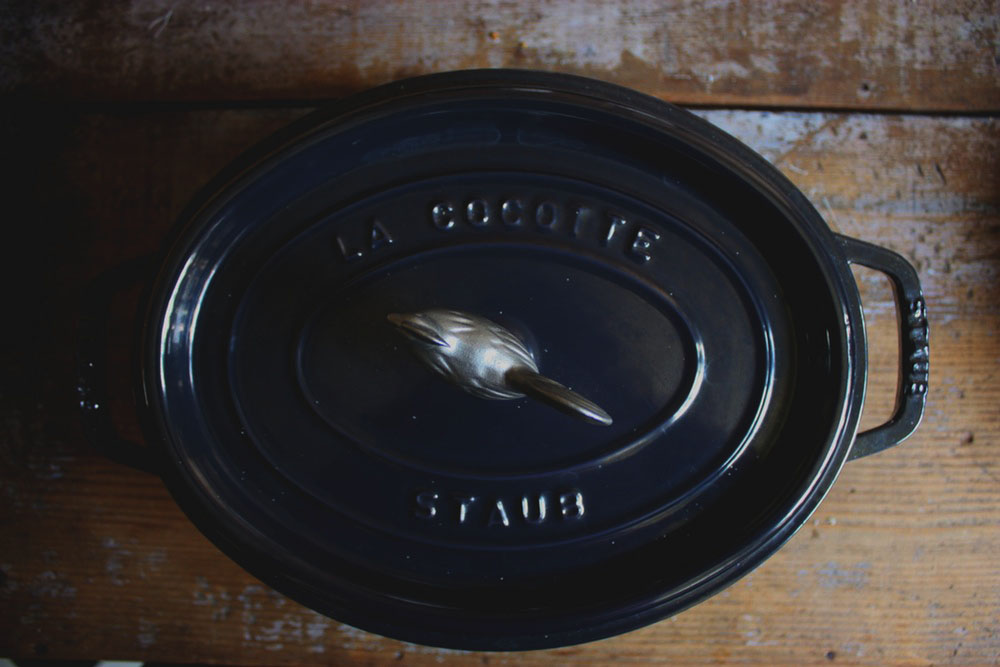 Cover and get it into the fridge and ferment. Mine fermented for 18 hours 45 minutes.

One hour before you plan to bake the bread, preheat the oven to 500 degrees, installed with a baking stone and cast iron pot loaded with lava rocks which you have placed on the oven floor. 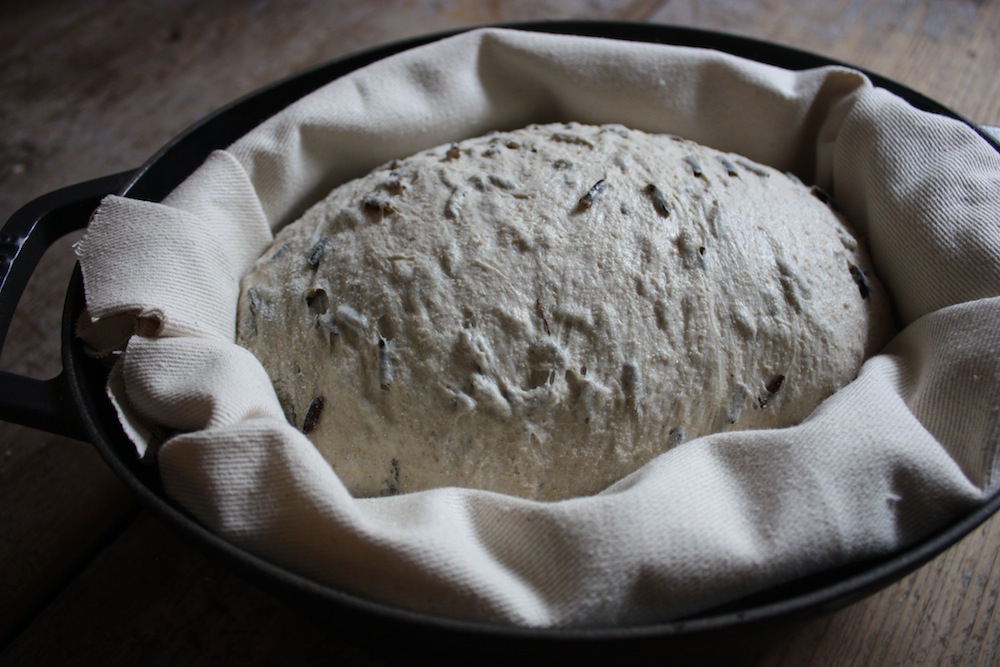 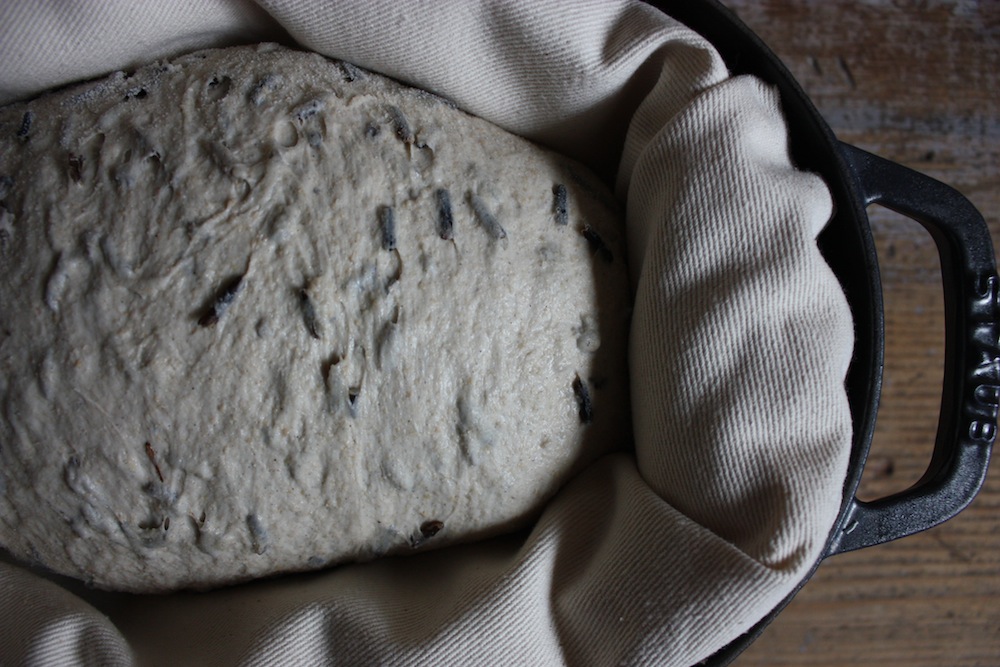 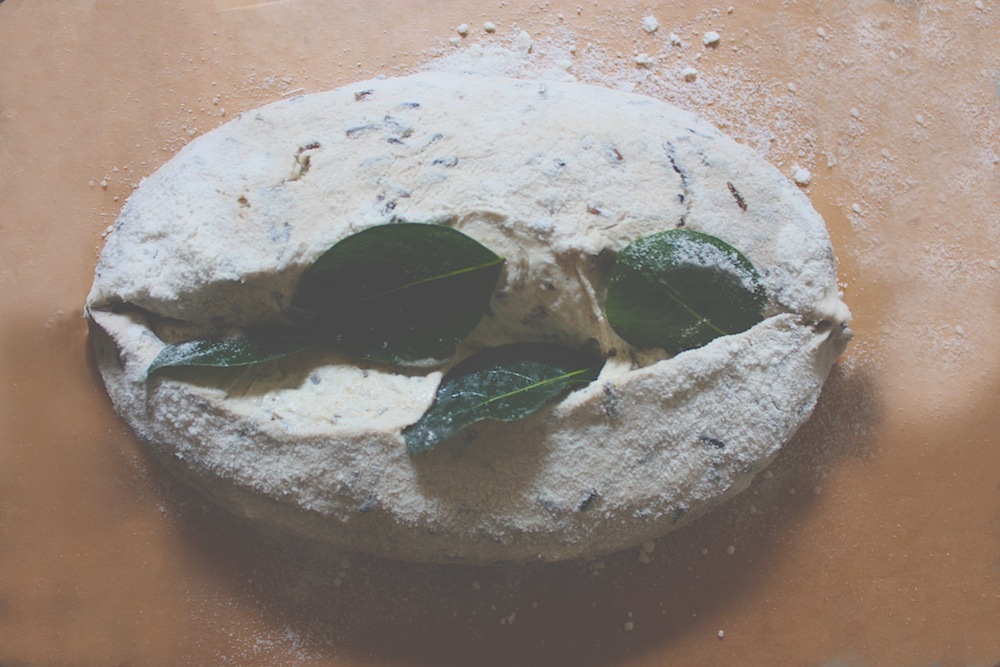 Fill up a 4 cup measure with 3 cups of water and a full tray of ice cubes. Set aside.

Slide the dough onto the stone, then pull out the pot of lava rocks a bit and pour the ice water over the rocks. Quickly slide the pot back into the oven and steam for 15 minutes at 500 degrees. After 15 minutes, turn the oven down to 475 degrees and steam for 15 minutes more. After the steam, remove the lava pot from the oven and bake out till the loaf is chestnut brown, spinning it now and again for even heating. You may need to lower the oven to 450 for the last 10 minutes of cooking so that it does not burn. You want that crack down the center to bake out thoroughly. Mine took about 55 minutes to bake, I believe.

Cool the loaf for a full hour, and remove the leaves before slicing. 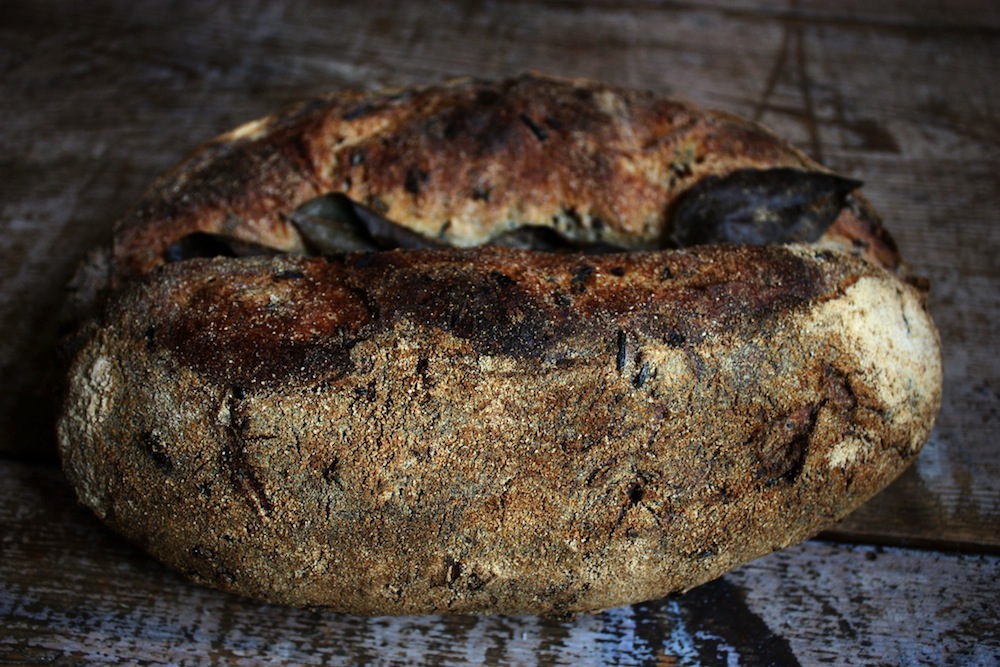 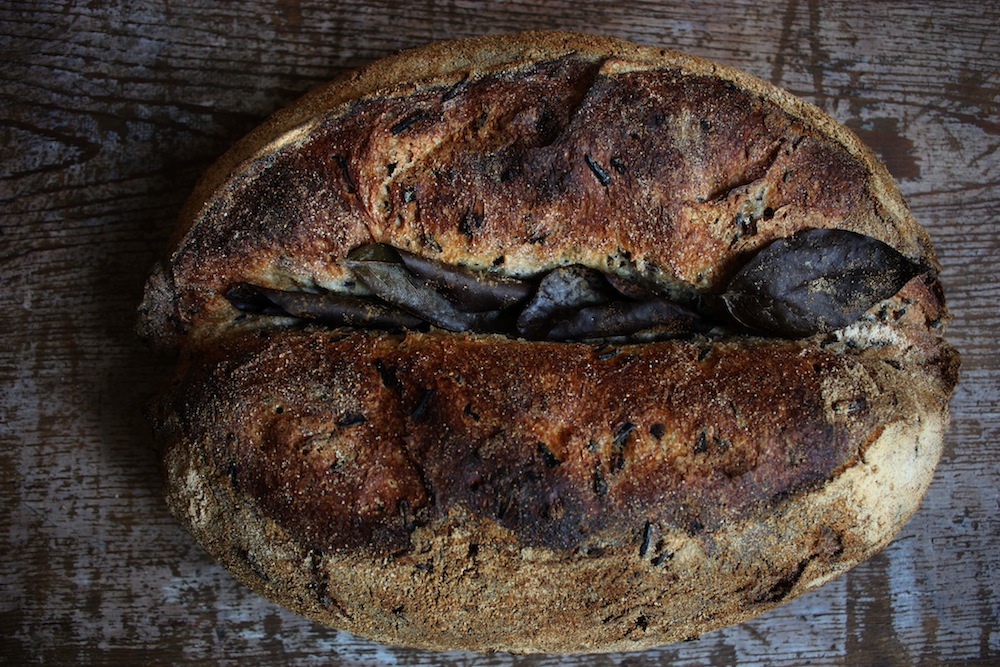 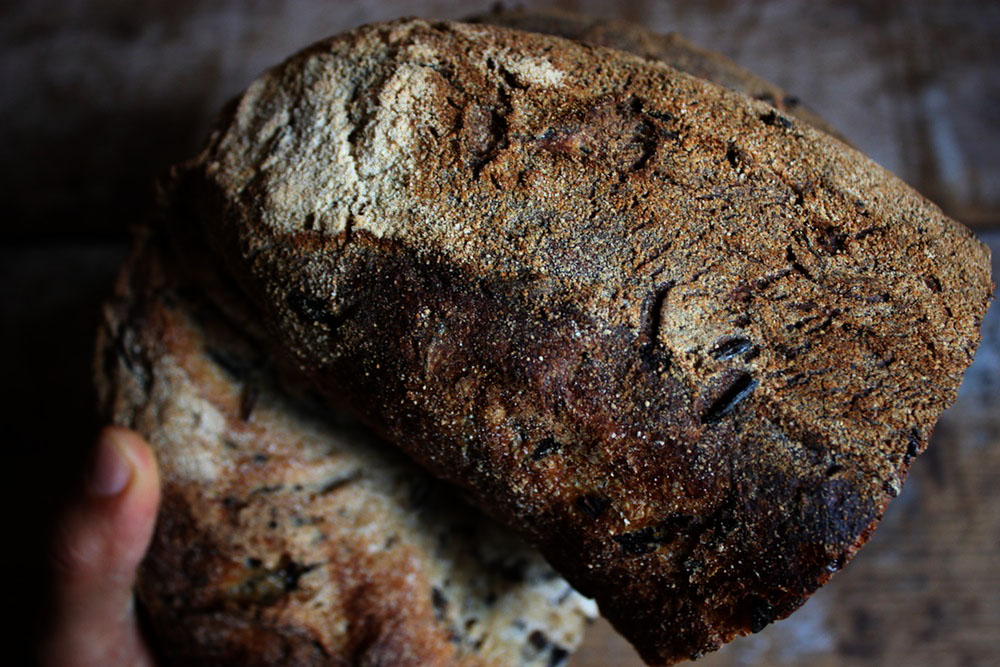 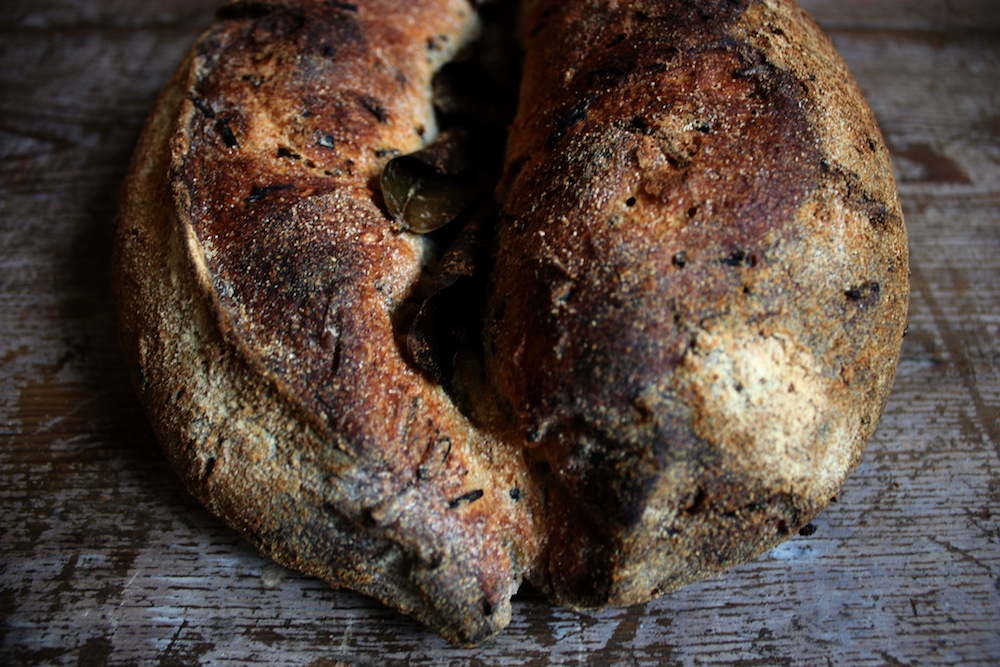 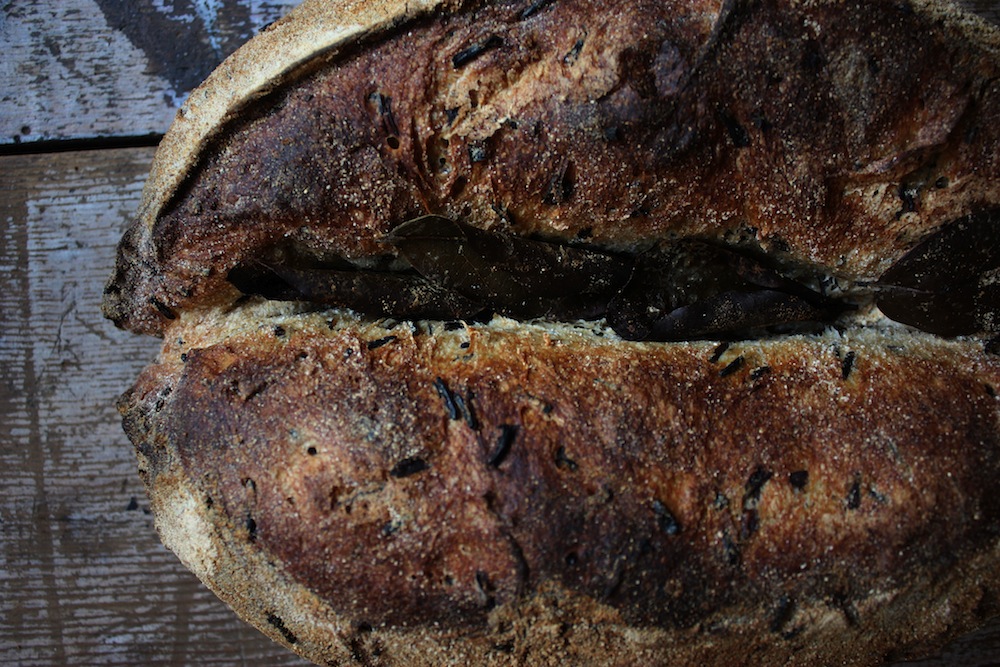 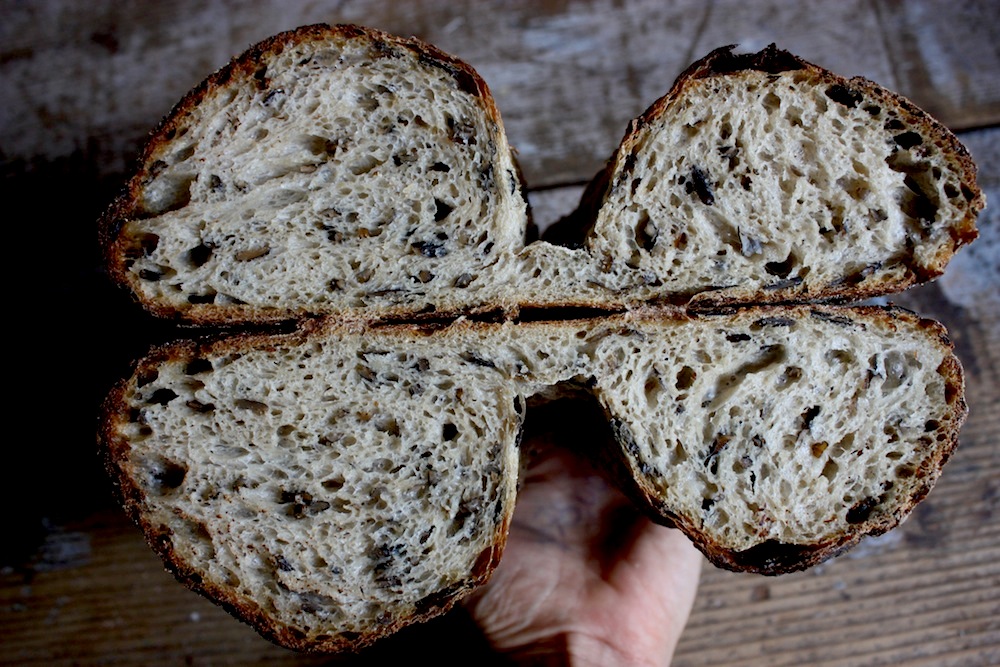 (This post was sent to Susan's Wild Yeast Blog)
Posted by France at 1:19 PM