Well, one new dough, two new ideas. But I'll get to that in a minute.

So, I have never been one of those people who nurture themselves when sick. I do the opposite of what I'm supposed to do. Instead of resting, I run around like crazy and do as much stuff as possible. It's like I'm thumbing my nose at being sick. And who has ever heard of getting sick in the middle of summer during a heatwave?

It all began Friday. The start of my weekend, right. I was grinding rye berries for my starter, and I spilled the bag. Of course the little silver berries scattered behind and beneath every conceivable piece of furniture (I have to grind my flour in my atelier because the walls are so thin in my apartment that the neighbors next door bang about if I grind in my kitchen, which shares a wall with their bedroom), so I began collecting the berries, moving furniture, sweeping under here and there, aghast at how much dust was taking up residence. Of course that prompted me to really start moving things about, getting nitty gritty about taking up all that dust. I started thinking about all of the cabinets and closets and clutter that needed to be dealt with too. May as well, I'm already married to this cleaning frenzy, and it's my birthday in 12 days, so I want my life to be spotless before I enter my new year. Well, all that led to so much deep cleaning that I filled a quarter of a dumpster, hauled a bunch of crap out to the curb, gave stuff away to a friend. All because of that damned bag of rye berries gone mad. Of course, all the while I am feeling ill, right, and the dust is not making things better. During this (three-day) stint of madness, having autoclaved every piece of furniture, scrubbed every cabinet raw. I also start a round of bread. Not one, but two different kinds. Right after the farmer's market, of course. 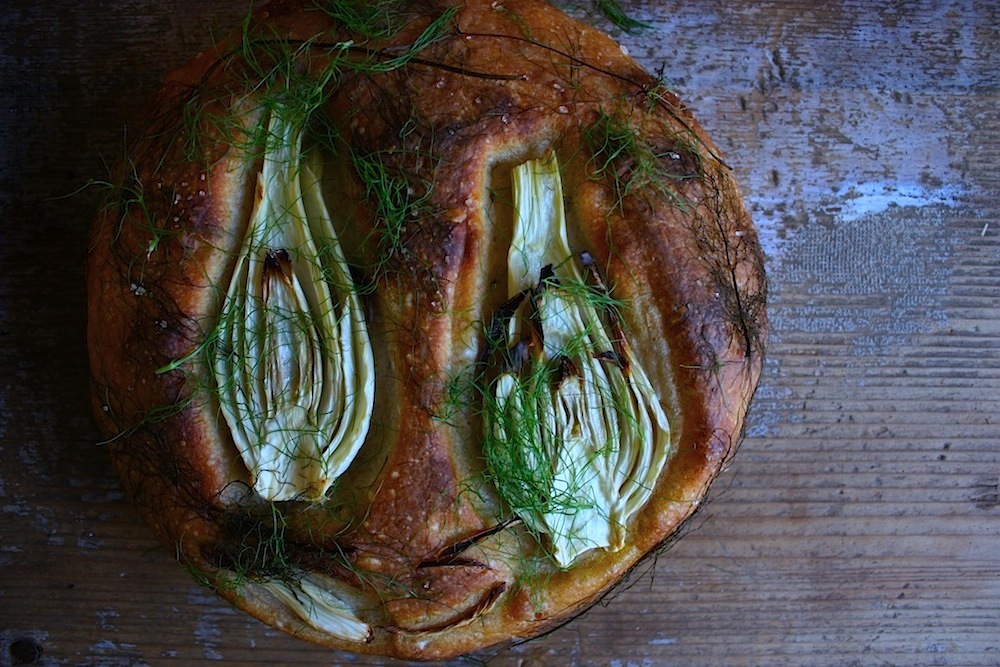 As you can see I'm still on this focaccia kick. I think it's because the onion focaccia from the last post was so pretty that my wheels have been spinning ever since. I also wanted to perfect the final fermentation time for our focaccia (10 hours). The onion focaccia eased the fennel image into my brain, and since I wanted a thinner loaf this time around, I decided to snip off a bit of the dough giving me another opportunity to fancy things up. Eggplant. Of course! It would fit perfectly into this little slip of dough, and they're so gorgeous when you roast them, I figured slices of the purple beauties would be fantastic on today's focaccia. 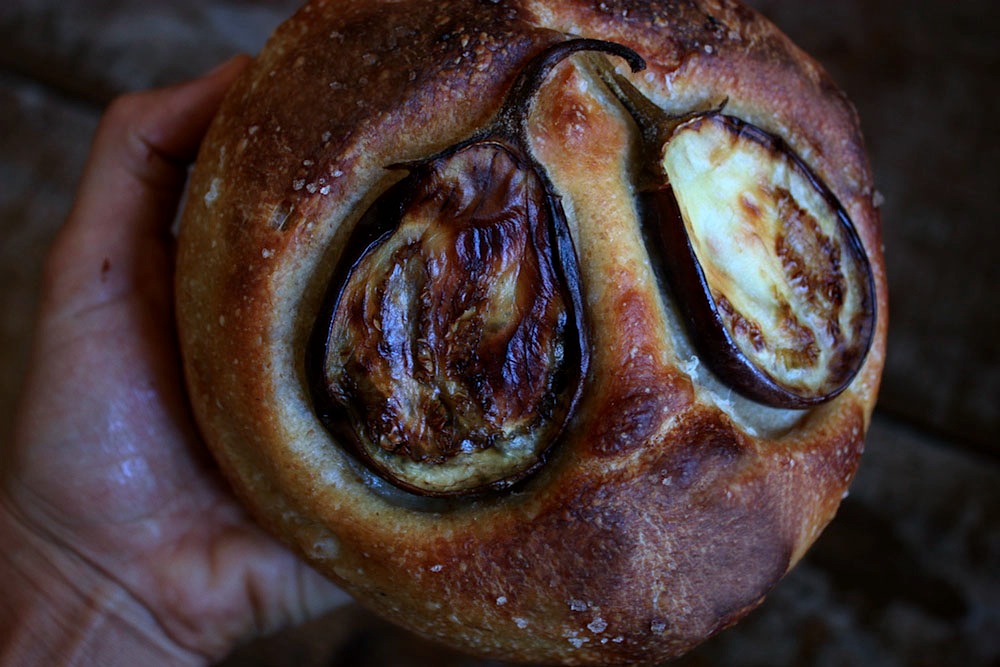 This time around I made parchment collars for them so they popped out of the pans beautifully. The flavor was fantastic. Totally mild with no acidity at all, which is what I aimed for. Good open and chewy crumb, crisp exterior. The whole thing rich with olive oil. Mm.

With all that said, on top of all of my cleaning, my minor illness, my marketing, my bread making and now this post, I am zonked and have to hit the sack to begin a new work week. 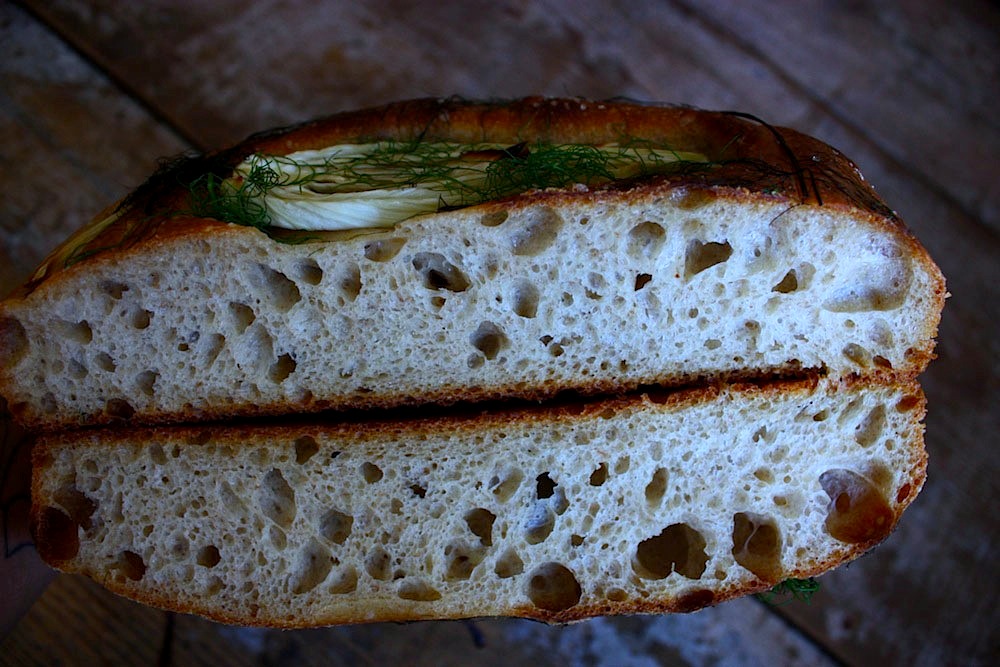 Three days before you plan to make your levain, throw your starter into overdrive by feeding it three or four times each day. On the fourth day, build your levain by mixing up the following:

Mix up the above. Ferment. Mine fermented for 8.5 hours.

When the levain is at its peak, mix it with the flour and h2o until you reach a shaggy mass. Autolyse for 1 hour 45 minutes

After the autolyse, squish the salt and olive oil into the dough. Now it's time for your 3 hour, 15 minute bulk fermentation.

You will not perform turns through the entire bulk, instead, you will intuitively know when it is time to stop by the rate of the dough's expansion. I stopped my turns at 2 hours then popped the dough in the fridge for the remaining half our of bulk because it was really warm in L.A.

After the bulk fermentation, scrape the dough onto a worktable that you have smeared with good olive oil, gather it into a loose round and let it rest for about 10 minutes. If you are going to make a baby focaccia whack off about a quarter of the dough, gather and rest the same as the larger dough.

Meanwhile, with a very small amount of olive oil, oil the sides and bottom of a cake pan with a removable bottom (9" wide, measured on the inside x 3" deep); fit with a circle of parchment along the bottom and a ring around the sides. The olive oil will hold it in place. Now, once you've got it installed, oil the face of the parchment as well.

If you are going to make a baby focaccia to experiment with different toppings, prepare a smaller pan in the same way.

Pop the dough into the pan, gently spreading out to the sides of it. Drizzle a small amount of oil over the top and smear it a bit. Cover with a plate and refrigerate for 10 hours. This seems to be the magic number for focaccia, resulting in a non-acidic final bread. 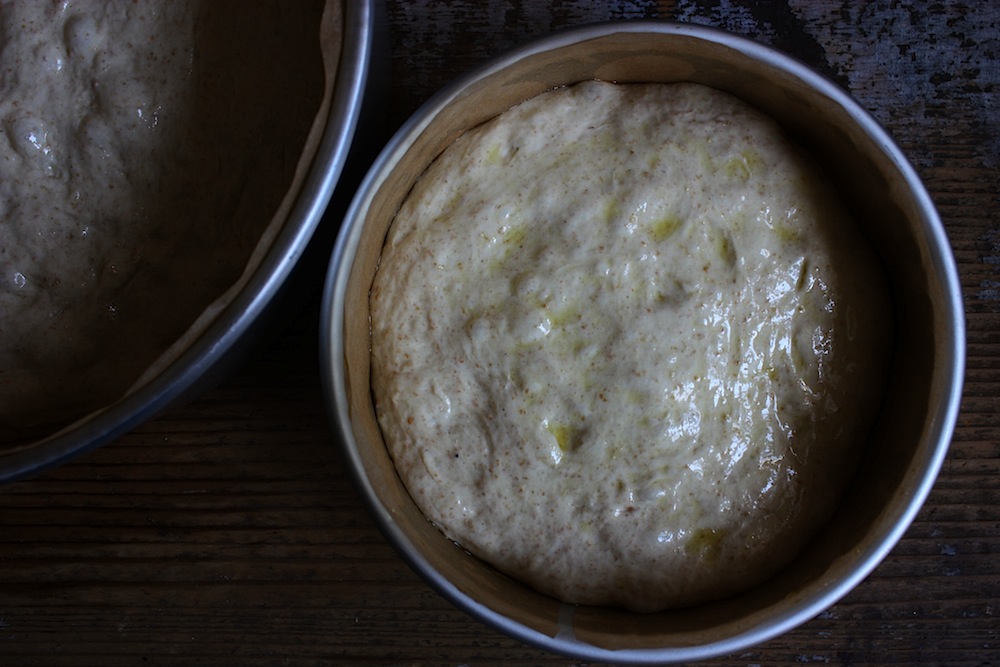 One hour before you plan to bake the bread, preheat the oven to 550 degrees, installed with a baking stone and a pot filled with lava rocks (this should be place on the floor of the oven). Remove the dough from the fridge now too.

Now, neatly slice your fennel and eggplants so that you arrive at 1/4" thick cross sections that include some of the green top. Arrange over the top of the dough in some comely fashion, pressing the vegetables down into the dough gingerly, you don't want to deflate it, but if you don't sort of embed them, they will float right off of the dough during oven spring.

Leave the dough rest at room temp during this hour of oven preheat to regain its shape.

When you are ready to bake, add some ice cubes to a 3 cup measure and fill with with water. Set aside.

Sprinkle the face of the dough with the fleur de sel and drizzle with the olive oil, spreading it a bit so that the surface takes on a golden sheen. Slide the focaccia onto the stone, then pull out the pot of lava rocks a bit and pour the ice water over the rocks. Quickly slide the pot back into the oven and steam for 10 minutes at 500 degrees.

After 10 minutes, turn the oven down to 460 degrees and steam for 10 minutes more for a total of 20 minutes steam. After the steam, remove the lava pot from the oven and bake out at around 450 till the loaf has properly browned, spinning it now and again for even heating. Keep the heat low on this one, because it it inclined to burn.

Cool the loaf for about 15 minutes on a wire rack before turning it out of the pan and cooling for a further hour. You should not have an issue with sticking due to the savvy use of parchment. To serve, scatter with fresh green fennel frond and share with a friend. 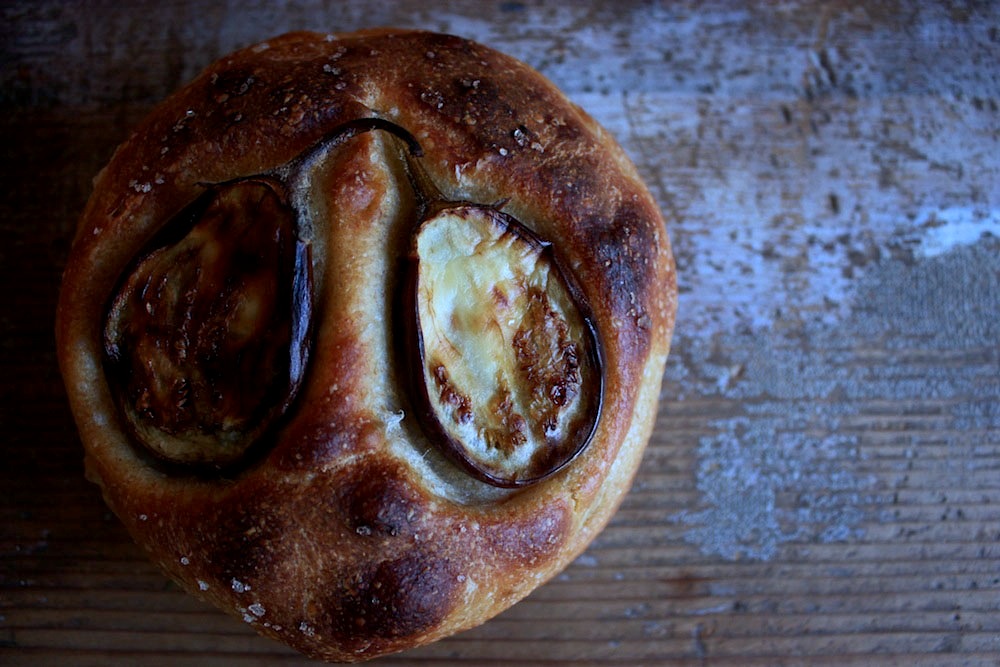 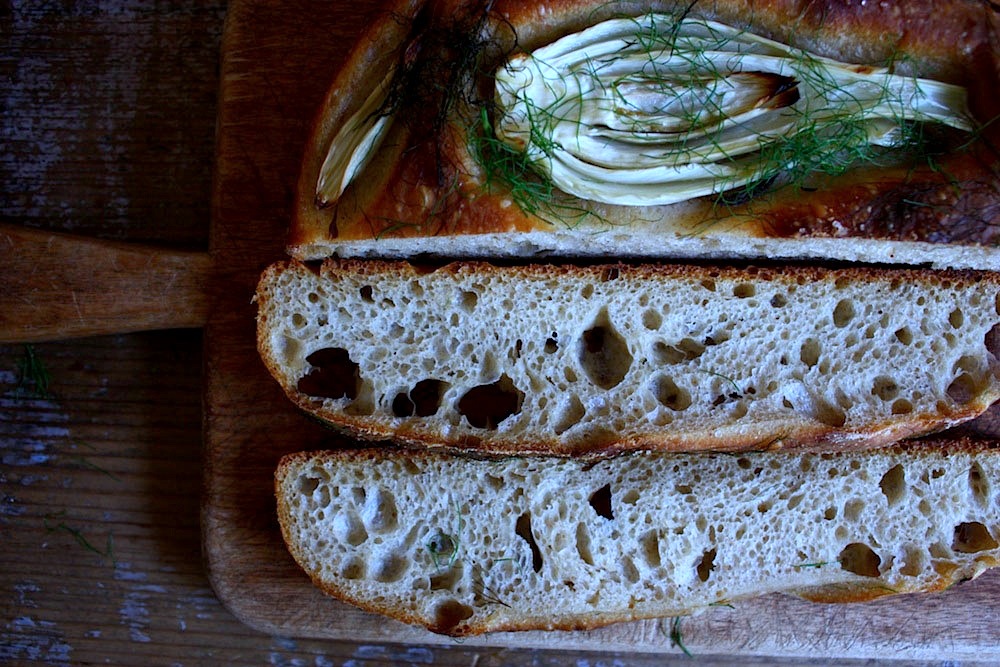 This loaf was shared with Susan at Yeast Spotting, of course!
Posted by France at 10:56 PM